Father Sun Zhenhua's courage earned him praise from Catholics, but also resulted in him being detained by the authorities 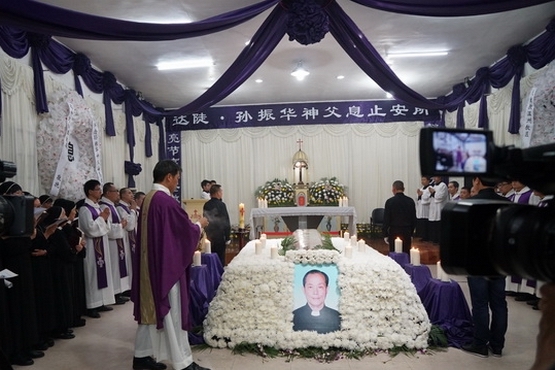 The funeral Mass for Father Thaddaeus Sun Zhenhua of Wenzhou who died on Nov. 2 following an accident on a pier. (Photo courtesy Wenzhou Diocese)

An elderly Chinese priest who died following an accident at a construction site has been remembered by both open and underground Catholic communities in Wenzhou Diocese as an upright man who put the interests of the church first.

Father Thaddaeus Sun Zhenhua died of serious injuries during a pastoral trip when the accident occurred on a pier in Yongjia, Zhejiang province in eastern China on Nov. 2. He was 83.

Father Sun was an "open" church priest in Wehzhou Diocese who also gained respect from priests and Catholics of the underground church because he obstructed a delegate from the Bishops Conference of Catholic Church in China and Chinese Patriotic Association (BCCCC & CPA) from reading an appointment letter during Bishop Zhu Weifang's installation in 2010.

Father Sun's courage earned him praise from Catholics, but also resulted in him being detained by the authorities.

Father Sun also wrote letters to state leaders during the governance of Hu Jintao to express his opinion on the state policies regarding the Catholic Church.

Although some senior clerics regarded such behavior impetuous and rash, they admitted that his intention was for safeguarding the Catholic Church's interests.

Thomas, an open church Catholic, said that Father Sun ignored the consequences to safeguard the church. "To do what he believed is right to do. Although it was not easy, he was right," Thomas told ucanews.com. A day after his death, Father Sun's body was laid in a coffin at a ceremony officiated by Father Ma Xianshi, who runs the diocese, at the Catholic cemetery in Maao.

After Father Sun passed away, Catholics visited the church in Maao and paid their last respects from Nov. 3-6. Many parishes also dedicated a Requiem Mass for the priest.

The diocese held a funeral Mass for Father Sun on Nov. 6 where nearly 2,000 Catholics participated. On the following day, a farewell ceremony was held but attended only by designated church members.

After the ceremony, Father Sun's remains were sent to be cremated and then stored at the columbarium in Maao, next to the memorial tablet of Bishop Vincent Zhu Weifang, who died Sept. 7 at age 89.

A priest, who asked not to be named, told ucanews.com that several underground church priests attended the funeral Mass despite authorities telling them not to.

The authorities also did not allow them to send wreaths but an electronic wreath that hung on the hearse said: "Father Sun Rests in Peace" and was attributed to detained Bishop Shao Zhumin and his priests.

Thomas, the open church Catholic, said he first met Father Sun when he was just seven years of age and remembered the times the priest brought an accordion to teach them hymns during catechism classes.

Thomas said Father Sun had a powerful voice. "At Mass, Catholics who were falling asleep would be woken by father's strong voice, which was very distinctive, just like his character," Thomas said.

He said Catholics had a very deep affection for Father Sun.

Another Catholic, Joseph, said Father Sun had a pure heart. "His deeds reflected his purity. He did not consider any adversity but only the church's interests," Joseph said.

He said Father Sun was a good listener and that many Catholics, especially the elderly, liked to go to him for confession.

Born in Ruian of Wenzhou on Aug. 19, 1934, Father Sun was admitted to St. Vincent's minor seminary in Ningpo in 1947. But the seminary was shut down in 1953 and he was forced to stop his studies due to the rapid changes in China's political situation.

In 1984, he returned to Wenzhou Diocese and was ordained. Following that, Father Sun was involved in pastoral work at Longgang Church, Wenzhou Cathedral and Yongjia Church.

During 2005-11, he was the dean of Yongjia Deanery and parish priest of Oubei Church.

During his final years, Father Sun was transferred back to the diocese for recuperation but still managed to continue pastoral work.