Chinese pilgrimage to the Netherlands

Event organized to commemorate Dutch bishop who was martyred in China 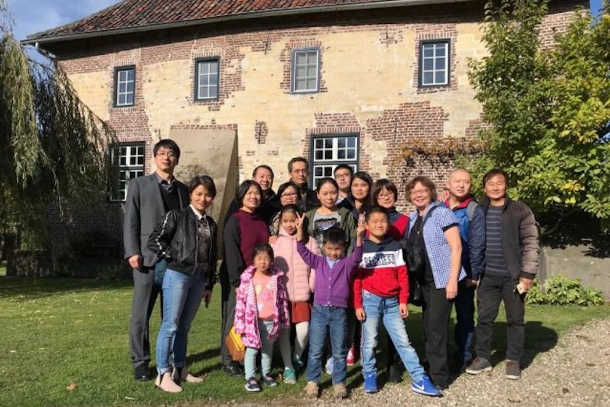 An image of Dutch Chinese pilgrims outside the place of birth of Bishop Francis Schraven in the Netherlands. (Photo provided by Monsignor Schraven Foundation)

Catholics from China recently joined a pilgrimage to the Netherlands village of Broekhuizenvorst to commemorate Dutch Bishop Francis Schraven and others who lost their lives in China.

In 2012, the Memorial Chapel of Bishop Schraven was completed in the village, including artwork depicting how invading Japanese soldiers murdered Schraven and eight companions.

On Oct. 9, 1937, the Japanese army captured the ancient city of Zhengding and many frightened Chinese were given refuge in Bishop Schraven's residence.

The Japanese army asked the bishop to hand over 200 females for use as comfort women (sex slaves) by the invaders, but the bishop refused to do so.

Consequently, the ill-fated bishop and the other victims were bound and bundled off.

Two months later, their remains were found in a pile of ashes a few hundred meters away.

Among the nine martyrs, seven were Vincentians, comprised of Bishop Schraven, four priests and two seminarians. There were also a Cistercian priest and a non-Catholic whose job it was to repair an organ. The atrocity came to be known as the Zhengding Church Massacre.

At the Oct. 7 Broekhuizenvorst commemoration in the Dutch province of Limburg, many non-ethnic Chinese faithful were touched by the singing and prayers of ethnic-Chinese churchgoers from within the Netherlands as well as from China.

One Dutch Chinese Catholic, who was overcome by emotion and wept, said that the story of the martyrs would be passed on to future generations.

In the afternoon, pilgrims attended the annual Monsignor Schraven lecture where there was mention of Father Aemilianus van Heel, who was also martyred in China.

The Dutch Franciscan monk was murdered by the Japanese army after he too resisted handing over women into sexual servitude.

A priest from China, who helped inspire the pilgrimage by providing more information about how the bishop sacrificed his life, said that the gathering created a special bond between those present.

The priest, after returning home, expressed gratitude for being able to participate in the pilgrimage along with others from China, many of whom already held Dutch passports.

Vincent Hermans, secretary of the Monsignor Schraven Foundation, told ucanews.com by email that he had been impressed by the dedication of those who participated.

"For us, Bishop Schraven was a member of our family, but he became Chinese with the Chinese," Hermans said. "I am sure that even in Heaven he identifies as Chinese, not Dutch any more."

It was therefore very important to have Chinese people involved in the pilgrimage.

Hermans noted that the foundation is seeking Bishop Schraven's beatification by Pope Francis, as a step towards sainthood.

Bishop Schraven was born in Limburg province in 1873, educated at the Episcopal College in the historic southeastern Netherlands city of Roermond and ordained in Paris, France, in May 1899.

He travelled to China as a missionary in the same year and was made Bishop of Zhengding in 1921.