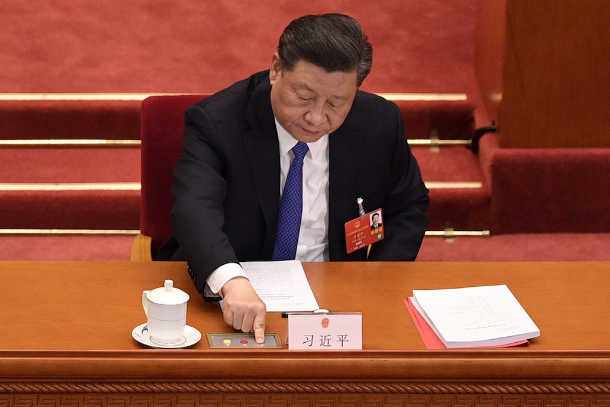 Chinese President Xi Jinping votes on a proposal to draft a security law on Hong Kong during the closing session of the National People's Congress at the Great Hall of the People in Beijing on May 28. (Photo: AFP)

China’s rubber-stamp parliament has approved a resolution to draft new legislation designed to clamp down on dissent in Hong Kong, calling into question the “one country, two systems” framework that has governed the territory since 1997.

The threat of the new law, backed by the National People's Congress in Beijing on May 28, has triggered widespread fears among human rights groups, diplomats, foreign businesses and the media.

At this stage there are no specific details beyond the intention to criminalize sedition, secession, foreign influence and vague “terrorist acts” — the street protests of the past 12 months have been described as terrorism.

The law is expected to be drafted in the coming months and can be promulgated by the Chinese government any time its wants, according to state media, Reports said it was expected to be in place by September.

A previous attempt to pass a national security law in 2003 that failed due to street protests contained broadly worded bans on sedition, subversion, secession and treason while also enhancing law enforcement powers.

The bill is also expected to make it easier for authorities to win national security cases in court and would likely ban foreign judges — who have long provided ballast for Hong Kong’s legal system — from hearing charges brought in accordance with the new laws.

Since the annual National People’s Congress — delayed from March to May this year due to the coronavirus pandemic — put the resolution up for debate on May 22, it has triggered a string of reactions.

The latest has been the recommendation by US Secretary of State Mike Pompeo to remove Hong Kong’s special status for trade and investment because he now considers it a full part of China.

"We are designing our responses to be sure to help Beijing understand that as a nation of law we will invoke the law that Congress passed in the Hong Kong Policy Act and Human Rights and Democracy Act,” he said. “But at the same time we will do our best to ensure the people of Hong Kong are not adversely affected.”

The US has also called for a virtual meeting of the UN Security Council to discuss Hong Kong and China's proposed national security law.

“This is a matter of urgent global concern that implicates international peace and security, and warrants the immediate attention of the UN Security Council," State Department spokesperson Morgan Ortagus told reporters.

"The bottom line is that in response to the rapid erosion of Hong Kong's autonomy since last March, brought to a head by the PRC's announcement last week that it will unilaterally and arbitrarily impose national security legislation on Hong Kong, the secretary has certified that Hong Kong does not continue to warrant treatment under United States laws in the same manner as US laws were applied to Hong Kong before July 1997.”

Beijing, supported by Hong Kong’s Chief Executive Carrie Lam, has attempted to downplay the move, saying it will only affect a few people, with Lam saying that "rights and freedoms are not absolute."

There has been further consternation in Hong Kong about a law — this one to be enacted locally — that would criminalize disrespect towards China's national anthem, which has been booed on some occasions including football matches.