Sisters upset that their congregation was disbanded 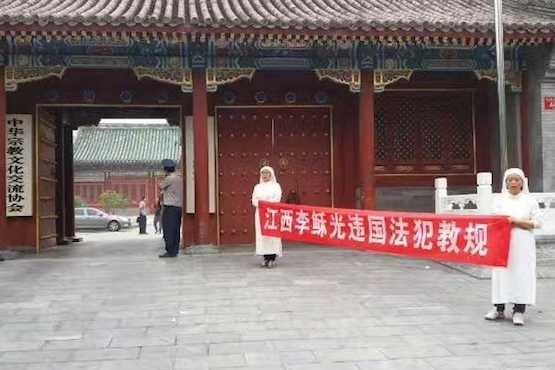 Two nuns from southeast Jiangxi province protest against their bishop in front of the entrance of the State Administration of Religious Affairs in Beijing. (Photo supplied)

Two Chinese nuns have been on a hunger strike since June 12 because they say they have not been properly compensated for the disbanding of their religious congregation.

Sisters Gao Wanjuan and Jiao Jialin of Our Lady of Good Counsel in southeast Jiangxi province launched their hunger strike outside the State Administration for Religious Affairs (SARA) in Beijing after they failed to get help from various government departments since their congregation was disbanded in October 2014.

The nuns accuse Bishop John Baptist Li Suguang of Jiangxi (Nanchang) — who disbanded their congregation — for not providing adequate compensation.

"We are determined to die for justice in the hunger strike," Sister Jiao told ucanews.com.

Following the congregation's disbandment, Bishop Li allowed its 23 nuns to decide their own future. In a 2014 statement, the bishop said the nuns could join "other religious congregations, live a secular life or negotiate with parish priests to serve in the diocese [as laywomen]." Whatever the nuns decide to do with their lives is a personal matter and has nothing to do with the diocese, said the statement.

Bishop Li said there were numerous reasons for the congregation's disbandment, among them continuous arguments among the nuns after the diocese assigned a nun from Beijing as their acting superior.

"We all disagreed with his decision. There were arguments but it was a problem of individual people," one of the affected nuns told ucanews.com in 2014.

The bishop's decision was "cruel" as the nuns' ages ranged from 32 to over 50, have been in the congregation for 12 to 17 years and they would be stigmatized by Catholics if they returned home, she said.

The disbanding of the congregation has aroused attention among Catholics as they allege that according to canon law, a diocesan bishop has no authority to disband a religious congregation. Hunger strikers, Sisters Gao Wanjuan and Jiao Jialin of Our Lady of Good Counsel in front of the entrance of State Administration of Religious Affairs in Beijing. (Photo supplied)

However, a diocesan source who asked not to be named, said most of the Our Lady of Good Counsel nuns were dismissed from other dioceses before they came to Jiangxi and some had a history of being problematic. The late Bishop Wu Shizhen of Nanchang, the predecessor of Bishop Li, accepted them into the Our Lady of Good Counsel without investigating their backgrounds and personalities, said the source.

The source added that the diocese paid 10,000 yuan (US$1,470) to each of them as compensation and is planning to establish a new congregation to invite some nuns to come back. "But the two nuns conducting the hunger strike are doing it for the money. They do not really want to be nuns," the source said.

However, one of the hunger-striking nuns, Sister Jiao, said this was not true.

"The diocese claimed the St. Paul Convent in Yunnan province will set up a branch convent in Jiangxi and promised four former nuns that they could come back to Jiangxi after they finish their novitiate in Yunnan," said Sister Jiao.

"But after a ceremony for the completion of their novitiate, they were sent back to Yunnan again. There was no branch convent as claimed," she said.

After advice from lawyers, Sisters Jiao and Gao decided to fight for compensation of 5 million yuan each according to various regulations. But this did not get them far.

"We wanted to go through with a lawsuit but the courts rejected us, saying that it was not a civil or criminal case but a religious affair. So it has to be dealt by the religious affairs bureau," said Sister Jiao.

But the nuns also got no help from local and national religious affairs bureaus and now government religious officials are trying to stop their hunger strike.

"A SARA official received our complaint but then told Shu Nanwu, secretary-general of the Jiangxi Catholic Patriotic Association, and some provincial government officials to come and stop us," the nun said.

"Shu took photos and examined our condition every day. He said they have two tasks: one is to persuade us to give up and the other is to bring us home," she said, adding that "no clergy has come to see us. It is apparent that the diocese has decided to let us die."

Ucanews.com could not reach Bishop Li, who is approved by the Chinese government and the Vatican, or Shu Nanwu for comment before deadline.

There are around 3,170 nuns in the open church community in China and some 1,400 in the underground community. The nuns belong to 87 open church and 37 underground congregations, according to the 2016 Spring Issue of Tripod, a quarterly journal of the Hong Kong Diocese's Holy Spirit Study Center.