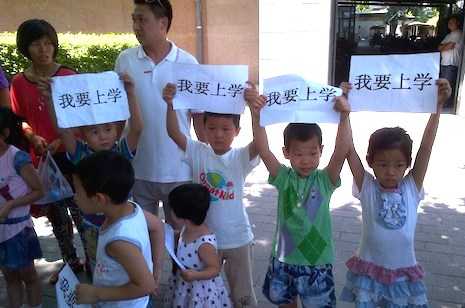 By Tom Hancock for AFP, Beijing

Fidgeting with his placard, six-year-old Fang Mingxing made an unlikely protester. But he was on the front line of a demonstration in China's capital, shouting: "I want to go to school."

He should be starting classes in Beijing this autumn, but has been denied a place along with thousands of other migrants' children, with some parents daring to confront Communist authorities through repeated protests outside government offices.

"I really like Stephen Hawking, but China has no one like him," said one parent, referring to the British theoretical physicist. "That's why I want my child to go to school."

Many of the demonstrators have built up businesses over 10 years or more, but now find themselves on the wrong end of China's latest development plan.

Migrants flowing from the poverty-stricken countryside to the cities have been the engine of China's decades-long economic boom and now number 245 million, according to the National Bureau of Statistics.

Once they move, though, the country's household registration, or hukou, system denies them equal access to health, education and housing benefits.

With discontent festering, the ruling party has pledged to give migrants more equal rights.

But it has also vowed to limit the expansion of China's largest cities, in the face of chronic pollution and traffic gridlock.

Now migrants to Beijing – population 21 million – are increasingly finding their children barred from school, even if they have lived there for decades.

Parents and academics say the new restrictions are aimed at driving migrants out of the capital, as part of the national plan to divert urbanization into smaller cities.

"The government is not allowing our children to go to school," said Fang's mother Liu Xiaolan, 42. "They say, 'There are not enough resources here – you should go home.'"

But many insist the capital has become their home and they cannot leave.

"We have slaved our guts out in Beijing for 10 years. There's no way for us to return to the countryside," said Liu.

Medicine salesman Hou Tianwu added: "If we return home with our kids, we have to give up our careers."

Chinese law guarantees nine years of free, compulsory education for all citizens, and in recent years the largest cities have let migrants send their children to local schools even without a hukou, provided they produced as many as five supporting documents.

But for the coming academic year several Beijing districts are insisting both parents prove they live and work in the area before allocating a place – effectively barring commuters from educating their offspring.

Some authorities are demanding proof of social security payments, which may not be made by the employment agencies that many migrants work through, or even house ownership.

In some instances, parents say officials have bluntly told them that whatever documents they provide, their children will not be allowed to start school.

The restrictions will deprive "tens of thousands" of children of an education, the liberal newspaper Southern Weekend reported, adding some couples have even divorced so that the new regulations will apply only to the custodial parent.

Others have given up and returned home, it said.

Beijing city and district authorities did not respond to requests for comment.

The policy chimes with a Communist Party decision last year to "strictly control the population size of megacities".

"These restrictions are linked to the new urbanization plan," said Fu Weigang of the Shanghai Institute of Finance and Law.

"But the policy is too simplistic," he said, adding that Beijing's population did not need to be limited.

China has chronically under-invested in education, he says, with Beijing's state-run primary schools falling from 1,800 in 2000 to around 1,000 today, even while the population soared by 60 percent.

A wave of privately run schools have opened to fill the gap, but as they are not part of the official education system many do not provide students with the registration number they need to later take the key gaokao university entrance test.

Those that are within the system also appear to be enforcing the new rules, parents say.

"The good privately run schools require the same documentation as the government schools," said a father surnamed Ji, who runs a printing company.

"I would be willing to pay for my child to go to school in Beijing, but there is nowhere I can send him."

Pictures from one march showed protesters kneeling in front of a government building, holding signs reading: "Our children must go to school."

Senior officials have refused to meet the parents, some of whom say they have been detained or put under house arrest.

China has clamped down on civil activism on several fronts, including education, with campaigner Xu Zhiyong jailed for four years in January, partly for his involvement in migrant parents' protests.

"Our child has grown up in Beijing. Are we supposed to return to the countryside and live as poor farmers?" said parent Wang Ying.

"Our demand is simple: that our children can go to school." AFP