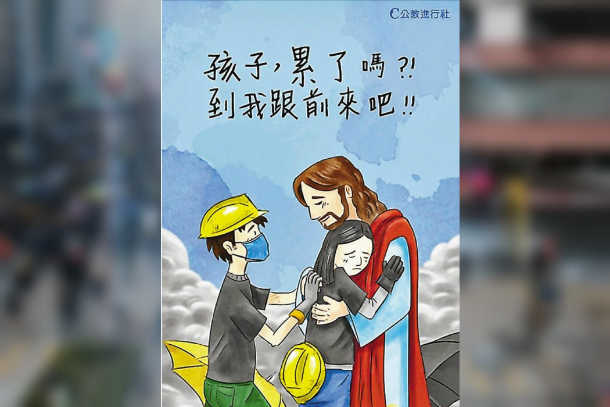 Chinese state media has once again accused Catholics in Hong Kong of supporting pro-democracy protesters in the increasingly violent conflict.

A video was posted on the internet showing eight students taking part in air gun shooting practice while parading an American flag on the rooftop of Yu Chun Keung Memorial College, a diocesan school.

Ta Kung Pao, a Chinese Communist Party-run newspaper, likened the content of the video to “violence assault training” and questioned whether the school had become “a mob training center.”

The school released a statement on Aug. 11 to clarify that the video had been recorded on Aug. 5, and showed only the activities of its gun club and in no way represented its views on the dispute rocking the city.

However, Ta Kung Pao, the oldest active Chinese language newspaper in China, also linked the video footage with a story showing that the school had allowed anti-government demonstrators to take refuge in its church.

“The church providing shelter to the mob wearing black has been criticized by people who say it is collaborating with them,” Ta Kung Pao reported. “Some worry that the church has become a base for those who are anti-China and anti-Hong Kong.”

Following a clash between police and protesters on the night of Aug. 3, the Mother of Good Counsel Parish opened the nearby St. Vincent Chapel for people to take shelter.

Wen Wei Po, another Communist Party-run newspaper in Hong Kong, had already claimed on Aug. 7 that having a chapel share a building with a Catholic primary school was allowing protesters to gain entry using religion as a cover to “hijack” the school.

A volunteer from the parish told ucanews.com on Aug. 12 that publication of that critical article had prompted a decision to close all parts of the building after Mass.

“The chapel will only be open for parishioners who have an appointment and with security approval,” said the volunteer.

Another internet report quoted the parent of a primary school student as saying that due to its decision to open during the protests, he was considering removing his child from the school.

“I believe these harsh words against the school will make the parish worry about the students and that it will no longer open the church for people in need during protests,” the volunteer added.

In the same report, Wen Wei Po also attacked the Catholic Center, the diocesan bookstore, for uploading a cartoon onto Facebook on Aug. 2. In the picture, Jesus is seen hugging two masked youths wearing helmets and black clothes, a trademark of the demonstrators, and telling them: “Kids, tired already? Come to my door!!” The newspaper decried it as “coverage and connivance with violent protesters.”

A diocesan staff member denied that it showed the diocese taking sides.

“In today’s Hong Kong situation, being attacked [by the media] is not a surprise,” he said. “But the message of the picture is very mild. It just shows Jesus offering shelter and help to those in need.

“We can see China is sparing no effort in repressing freedom of speech and is not tolerant of any dissent. We have to always be aware of this.”