Chengde project includes residence, convent and what is claimed to be the biggest cathedral in northern China 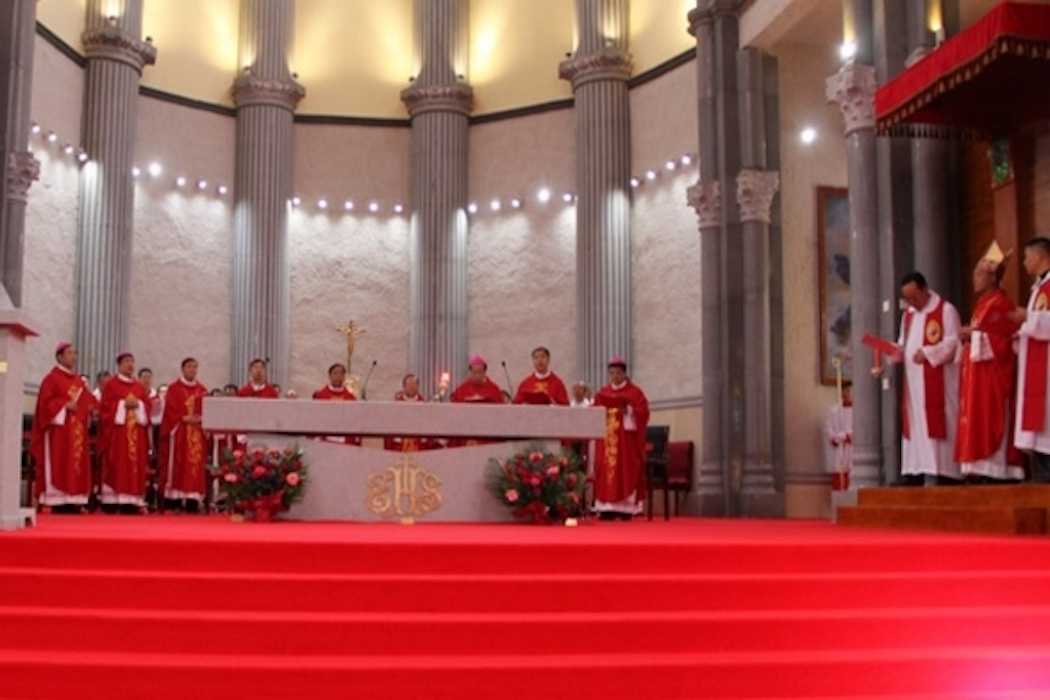 Bishop Guo Jincai (second from right) presides the Mass for the blessing of the new cathedral in Chengde, Hebei province, on May 15. (Photo from chinacatholic.cn)

A US$11 million complex comprising a cathedral, convent and residence has been built for a so-called illicit Chinese bishop.

Despite not having yet been recognized by the Holy See, Bishop Joseph Guo Jincai of Chengde has taken charge of what is claimed to be the biggest cathedral in northern China.

Construction of the 15,000-square-meter complex cost 70 million yuan, most of which was paid by Hebei Provincial Chinese Catholic Patriotic Association and Hebei Catholic Administration Commission. Less than half was collected by Bishop Guo, an unnamed source told ucanews.com.

If the proposed Sino-Vatican agreement is reached, seven illicit Chinese bishops including Bishop Guo would be recognized by the Holy See.

Hebei province has one million Catholics, with 30,000 in Chengde Diocese.

Catholics in Chengde are mostly farmers living in hardship. The source said their income was no way to finance such a big development. "Such a big expense is really horrid," he said.

The source said the complex appeared not to be on general religious land.

A Mass for the cathedral's consecration was held on May 15. It was presided by Bishop Guo and concelebrated by nine bishops, eight of whom were from the Bishops' Conference of the Catholic Church in China (BCCCC) and the Chinese Catholic Patriotic Association (CCPA). The new cathedral is believed to be the biggest in northern China. (Photo from the internet)

More than 800 people attended including officials of the Central United Front Work Department, State Religious Affairs Bureau and Hebei authorities along with nuns and Catholics.

A symposium was held after the Mass when government officials expressed the hope that Chengde Diocese under Bishop Guo's leadership would continue to uphold the flag of "loving the country and the church" and persist with the principle of independence and the direction of Sinicization.

Bishop Guo responded in a speech that the new complex reflected the care and support of the Communist Party and state for patriotic religious communities and individuals.

He said he would not fail to follow the guidance of President Xi Jinping's socialist ideology in the new era. He would live up to the expectations of the party and the government and strive to make the complex a model venue.

"Why did he not mention Christ and the church?" one Catholic internet commenter asked.