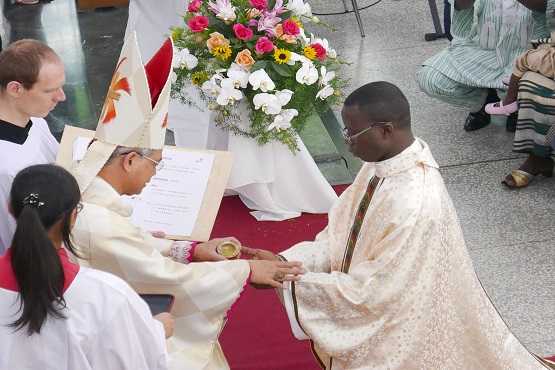 Inspired by a 19th century missionary to China, Father Joseph Youta Djiba from Togo was ordained in Taiwan on Feb. 18 for the Chinese province of the Society of the Divine Word congregation.

Archbishop John Hung Shan-Chuan of Taipei, from the same congregation, presided over the ordination at Our Lady of Fatima Church in Kaohsiung, southern Taiwan. Archbishop Peter Liu of Kaohsiung and Father Frank Budenholzer, the Divine Word provincial, concelebrated.

Father Djiba, 34, was born in Togo, the West African country where a quarter of its 7.5 million population are Catholics. He was serving as a deacon at Our Lady of Fatima Church in Kaoshiung before his ordination.

Togo was colonized by Germany and France respectively until its independence in 1960. Catholicism was introduced to his Siou hometown by German missionaries a century ago.

The new priest is the youngest son of a family with eight children. His eldest brother Gregory Djiba is a priest in Togo's Atakpame Diocese.

Father Youta Djiba said that he told his parents of his wanting to be a priest when he was 15 but his father rejected it because there was already one priest in the family.

In Togo tradition, the youngest son inherits the wealth of the family while having the duty to take care of the parents for the rest of their lives.

The young man gave up the idea and continued his studies. After graduation, Youta Djiba worked as a secretary in the largest cotton company in the country. Divine Word Father Joseph Youta Djiba (center) is helped with putting on his vestment by his eldest brother Father Goergy Djiba (left) and his mother (right) while his two sisters watch on the side, in Taiwan on Feb. 18. (ucanews.com photo)

"My boss was good to me and I was well paid. But I was not happy," the new priest told ucanews.com in Mandarin, a language he learned at Fu Jen Catholic University in Taiwan.

"There are many social injustices in Togo. Some people are very rich and some are very poor," he said.

"I was an altar server from the age of 10 to 22. I served at many funeral Masses. This prompted me to think about the meaning of life. I wanted to save the world and do good deeds. The most important of all is to save souls," he continued.

His university principal, a nun, asked him to think if the secretariat work was what he desired. He sought counsel from his parish priest and finally decided to join Atakpame Diocese after his brother.

However, Youta Djiba left the diocese to join the Divine Word congregation within three months, having read the biography of St. Josef Freinademetz, a 19th century Tyrolean missionary to China.

St. Freinademetz first arrived in Hong Kong in 1897 by boat and converted some villagers in northeastern Sai Kung. Then he moved to preach in eastern Shandong province in China.

With a Chinese name, Fu Rouse, the missionary was popularly known as "Mother of the Lunan Mission" for his pioneer missionary work in Shandong. He died in China due to an epidemic disease in 1908 and was jointly canonized with the Divine Word founder, St. Arnold Janssen in 2003.

Currently, there are 5,000 Divine Word members serving in 70 countries around the world.