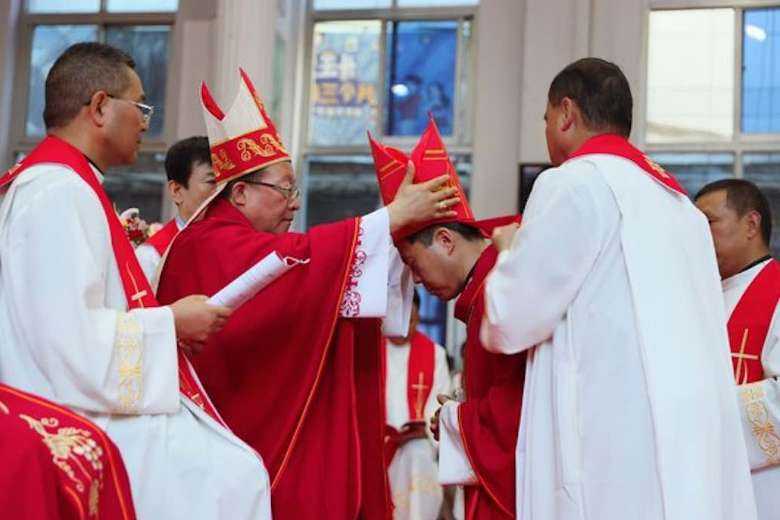 Chinese Catholics witnessed the consecration of the fifth bishop under a deal that China's communist government agreed with the Vatican three years ago.

Father Anthony Li Hui was ordained as the coadjutor bishop of Pingliang diocese at Gansu province in northwestern China on July 28, approved by both the state and the Church.

The 49-year-old Bishop Li is the fifth bishop ordained under the China-Vatican provisional agreement signed in 2018, church sources told UCA News. The Sino-Vatican deal, whose provisions are still not made public, reportedly allows the pope to approve and veto bishops approved by the Chinese Communist Party (CCP). Initially signed for two years, the agreement was renewed for another two years in October 2020.Bishop Li is the third bishop consecrated after the renewal of the agreement. His election as the coadjutor bishop of Pingliang was announced on July 24, 2020.

The Vatican News said Pope Francis made the nomination on 11 January 2021.

The consecration ceremony took place at the cathedral of Pingliang presided by Bishop Joseph Ma Yinglin of Kunming, president of China's state-sanctioned Bishops' Conference of the Catholic Church in China (BCCCC). Bishop Nicolas Han Jide of Pingliang and Bishop Joseph Guo Jincai of Chengde, BCCCC’s vice-president were concelebrants.Bishop Joseph Han Zhihai of Lanzhou, as well as some 200 Catholics including 30 priests, 20 nuns and representatives from the BCCCC, and Gansu province joined the ceremony, according to the BCCCC report on its website.Representatives of the Chinese Catholic Patriotic Association (CCPA), the state-run organization that oversees China's Catholics, also attended the function, it said.Father Yang Yu, deputy secretary-general of the BCCCC, read out the approval letter during the ceremony, the report said.Born in Mei County, Shaanxi Province, in 1972, Bishop Li joined the Pingliang diocesan preparatory seminary in 1989 and later studied at the national seminary in Beijing in 1992. He was ordained priest in 1996. He later studied the Chinese language at Renmin University in Beijing until 1998. Since 1998, he has worked at the secretariat office of the BCCCC and CCPA in Beijing. He has been the secretary of BCCCC’s presidents till he was elected coadjutor bishop of Pingliang.