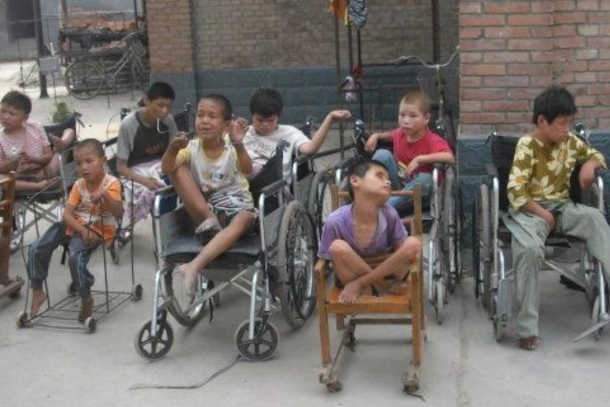 A file photo of physically challenged children in an orphanage attached to Zhengding Diocese in northern China. The government is threatening to take over the orphanage and its land. (Photo supplied)

A Catholic bishop in northern China's Hebei province has been asked to ban children from entering churches if he wants to reopen his churches and run an orphanage.

Bishop Jia Zhiguo of Zhengding has refused to sign a document that bans children below the age of 18 from entering churches, which was set as a condition for him to reopen churches. The move by authorities in Jinzhou city comes as churches have reopened in most parts of China and started religious services with restrictions, almost six months after they were closed because of the Covid-19 pandemic.The document that underground Bishop Jia was asked to sign agrees to prohibit children from attending programs of any sort inside a church. Paul, a Catholic in Zhengding, said authorities were not only asking the bishop to sign the document. "They were asking the whole diocese to sign the document. All parishes are required to sign a pledge that they will not allow minors to enter their churches or officials will not allow them to open churches," he said.Paul said authorities were using the pandemic as a cover to suppress the Church. "This requirement of banning children was not part of the requirement anywhere else in China. The local authorities added it by themselves," he said.A source who did not want to be named said that officials had said they would allow churches to open if the bishop signed the document. If he refused, authorities would take over a church-run orphanage for handicapped children and the bishop's house, he said.Bishop Zia said he would not sign the document because "the doors of the Church are open to all," the source added.The government has already moved older children from the orphanage. Only babies are left now. A source said the government wants to put on record that it was "buying" the orphanage but would not pay any money.A Catholic named Zhao who is connected with the developments told UCA News on July 6 that negotiations were still underway but the government wants to seize the orphanage."It is outrageous and a complete lack of respect for religious rights and freedoms, and it tramples on constitutional values," he said. The Communist Party’s negotiations will not take too long and they will find a reason to take over the orphanage, he warned.Zhao also said a group of nuns were taking care of the babies in the orphanage but authorities want the nuns to serve under their supervision and register with them. "Otherwise, they will be forced to leave."All nuns in the diocese were also asked to register with the state-sanctioned Church "or else they would have to go home and live their own lives,” Zhao said.Father Chang, a diocesan priest, said he would insist on churches' opening without banning children. "If the government closes the churches, they will gather in the homes of the faithful," he said.