Chinese cover up systematic genocide of Uyghurs in Xinjiang 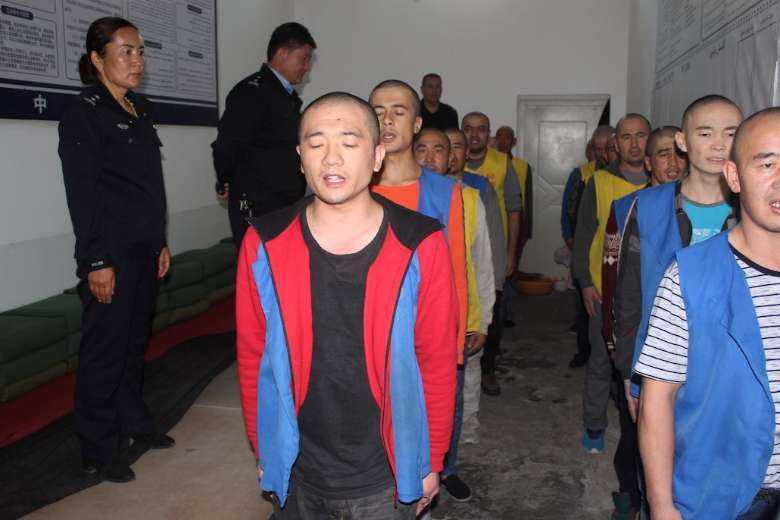 This undated image released on May 24 shows Uyghur detainees guarded by police as they stand in line apparently reciting or singing at Tekes County Detention Centre in Xinjiang, western China. A leak of thousands of photos and official documents has shed new light on the violent methods used to enforce mass internment in the region. (Photo: The Victims of Communism Memorial Foundation/AFP)

After dilly-dallying for nearly five years, China was well prepared for UN High Commissioner for Human Rights Michelle Bachelet’s six-day visit to assess the alleged genocide of Uyghurs and other Turkic-speaking people in Xinjiang province.

The Covid-19 pandemic too served as a blessing in disguise for China.

In a first visit by a UN human rights commissioner since 2005, Bachelet was expected to visit the cities of Kashgar and Urumqi in Xinjiang as part of her fact-finding mission.

But China's Foreign Ministry said Bachelet's high-profile trip would be conducted in a closed loop, which meant Bachelet and her team were isolated inside a bubble as part of Covid-19 protocols. The international media was barred from accompanying her.

The visit under Covid-19 restrictions did not provide unfettered access to Bachelet and her delegation to make a full assessment of the genocide charges in Xinjiang and critics have already expressed concerns.

According to the critics, in an arranged set-up, Bachelet would have been shown a rebuilt land and a people who have been re-educated to serve Chinese interests.

Uyghur children in the autonomous region in the northwest of the world’s most populous country were forced to learn Chinese and forgo their cultural identity.

Led by the US, Western nations said Bachelet was unable to conduct a complete assessment of crimes against humanity and genocide charges leveled against China five years ago.

"We think it was a mistake to agree to a visit under the circumstances," US State Department spokesman Ned Price told reporters on May 24.

Reacting to fresh media reports about human rights violations in Xinjiang, economy minister Robert Habeck said on May 25 that Germany was changing the way it deals with China by giving more priority to human rights issues.

Atrocities against Uyghurs came to light in 2017 after China declared them a threat to the state. People were separated from their families and sent to detention camps where they endured torture, indoctrination and sterilization.

Uyghur children in the autonomous region in the northwest of the world’s most populous country were forced to learn Chinese and forgo their cultural identity.

Women of child-bearing age were forced to have surgical sterilization in 300 camps that are currently operational across the Xinjiang region.

Nearly one million Uyghurs and other Muslims, including ethnic Kazakhs and Uzbeks, have been detained against their will in the camps.

In the detention camps, China is alleged to have used pernicious sophisticated technological tools such as algorithm tinkerers, face recognition designers, DNA mappers and smartphone tracking systems to identify Muslim minorities from the broader Han population in Xinjiang, a strategic location in China’s Belt and Road Initiative (BRI), which shares borders with Eurasia and is a carrier of economic stability for China.

Xinjiang contains 40 percent of China’s coal, roughly 20 percent of its oil reserves and serves as a gateway to European and Asian markets.

Following the 9/11 attacks in the US, China became a party to the global war on terror and started justifying its actions against Uyghurs to curb the three evils — separatism, religious extremism and international terrorism

Nine legislative bodies, including the US Congress and Canada, have termed the Chinese government’s crimes against Uyghurs as genocide. The UN has been pushing for access to Xinjiang since 2018. China, however, has denied the allegations and termed the detention camps as vocational and educational units to bring Uyghurs into the mainstream.

Beijing is wary of all forms of separatism. Besides Uyghurs in Xinjiang, bordering Kyrgystan and Tajikstan to the west, Kazakstan to the northwest, and Russia to the north, troubles are far from over in the autonomous region of Tibet and in the former UK colony of Hong Kong.

Because of Xinjiang’s natural resources and its trade and economic corridors, China is bent on keeping a stronghold in the region where the appeal of Islamic and Turkic nationalism is growing. According to China, Muslim-dominated Uyghurs and other Turkic-speaking ethnic people in Xinjiang are seeking a separate homeland.

In 1996, China categorized Uyghurs as a threat and local unrest has increased with knife attacks and bombings since 2009. Following the 9/11 attacks in the US, China became a party to the global war on terror and started justifying its actions against Uyghurs to curb the three evils — separatism, religious extremism and international terrorism.

During a meeting on May 25 with Bachelet, Chinese President Xi Jinping defended his country's human rights record. Xi stressed that human rights in China are subject to local conditions and warned against using international bodies to destabilize China.

Meeting Bachelet on the same day, Chinese Foreign Minister Wang Yi was prepared and came with a gift for the Chilean diplomat — a book of speeches by Chinese President Xi Jinping on respecting and protecting human rights.

By presenting none other than the top leader’s relentless pursuit of human rights, Wang was trying to put China’s best foot forward before Bachelet.

About the genocide and crimes against humanity charges, the Chinese leadership left no room for confusion. Genocide and the war on terror are not two sides of the same coin.