Hao Zhiwei, a female pastor of a house church in Hubei province, had refused to join the state-run church 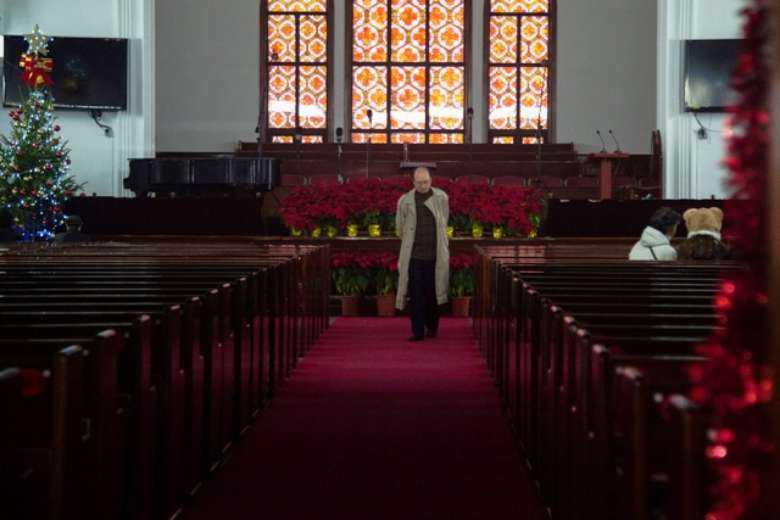 A churchgoer walks up the aisle following Christmas Day Mass at a Protestant church in central Shanghai on Dec. 25, 2021. (Photo: Jessica Yang/AFP)

A district court in central China has sentenced a female Christian pastor to eight years in prison for refusing to join Three-Self Church, a state-controlled body regulating Protestant churches.

Echeng District Court in Ezhou in Hubei province sentenced Hao Zhiwei, 51, pastor of a house church in Ezhou, on charges of fraud on Feb. 11, China Aid reported on Feb. 15.

Pastor Hao had been in custody since July 2019 when authorities in Ezhou arrested and detained her for two-and-half years after she refused to join the Three-Self Church.

She was charged with fraud for preaching the Gospel and receiving donations from church members without approval from the state-run Committee of the Three-Self Patriotic Movement of the Protestant Churches and the Christian Council, said her lawyer Si Weijiang.

Si said the case against Hao was unprecedented as for the first time a pastor of a house church was implicated in a fraud case.

The case against Hao was the beginning of a series of lawsuits against pastors and elders of house churches on charges of fraud, he pointed out.

Chinese house churches receive offerings from Christians and use the money to financially support preachers. This conforms to the teaching of the Holy Bible

“Chinese house churches receive offerings from Christians and use the money to financially support preachers. This conforms to the teaching of the Holy Bible and is adopted by churches all over the world. Christians’ offerings and the church’s support for preachers are closely related to the Christian church’s identity and mission,” Li said in a commentary last November.

He noted that since China adopted new regulations on religious affairs in 2018, the communist government has adopted various means to crack down on house churches, such as imposing a Sinicization policy, removal of crosses, sealing up and demolishing church buildings, banning church offerings and arresting preachers on charges of fraud.

Besides charges of fraud, the authorities have exploited other trumped-up charges to implicate preachers and pastors such as “illegal business operations,” “inciting subversion of state power” and “picking quarrels and provoking trouble.”

Pastor Hao Zhiwei graduated from Zhongnan Theological Seminary in 2001. Egangqiao Church in Ezhou assigned her as a preacher thanks to her excellent preaching qualities, according to China Aid.

Due to her reluctance to abide by stringent regulations of the Religious Affairs Bureau, her pastor certificate was denied in 2007.

When the local authorities banned the church, it became a house church. In 2018, the local government issued a notice to demolish the church, which Pastor Hao and church members strongly protested.

As Pastor Hao didn’t cooperate with the local government, she was charged with fraud and arrested on July 31, 2019.

Whatever the result, I believe God is using this to temper our hearts

Two other co-workers were arrested with Pastor Hao. They were detained for two years and released on bail. However, Pastor Hao remained in prison. She lost her husband in 2018 and has two sons.

Her elder son Paul expressed frustration over his mother's eight-year jail sentence but has not informed his schoolgoing brother Moses about the sentence so that he won’t be heartbroken.

“Whatever the result, I believe God is using this to temper our hearts,” Paul said.

JEFFREY RAM
PLEASE PRAY FOR THE PERSECUTED CHRISTIANS TO BE BLESSED WITH PEACE AND COURAGE TO FOLLOW JESUS. REFORMADVOCATE.COM NEWS/VIEWS Toronto, Canada Jeffrey S. Ram, Editor, February 16, 2022 INDIA- LIES ABOUT CONVERSION AND VIOLENCE AGAINST CHRISTIANS ARE TO TERRORIZE TRIBALS AND DALITS They are designed to retain Tribals (Scheduled Tribes) and Dalits (Scheduled Castes) in the cage of ignorance, ill health, poverty, and subjugation as make-believe Hindus. The decline of the Christian population from 2.6 percent in the 1971 census to 2.3 percent in 2022 proves that there are no conversions to Christianity. Telling lies of conversion in the name of Lord Shri Ram or after taking oath on Holy Gita and attacking Christian churches and worshippers demean Hindu religion. NIGERIA- THE GOVERNMENT IS IN COLLUSION WITH THE KILLERS OF CHRISTIANS PAKISTAN- 'SERVANT OF GOD' AKASH BASHIR IS CATHOLIC CHURCH OF PAKISTAN'S FIRST OFFICIAL CANDIDATE FOR SAINTHOOD AND MARTYRDOM Details at: https://www.reformadvocate.com/post/india-lies-about-conversion-and-violence-against-christians-are-to-terrorize-tribals-and-dalits REUSE THIS CONTENT/ SHARE THIS POST
Reply