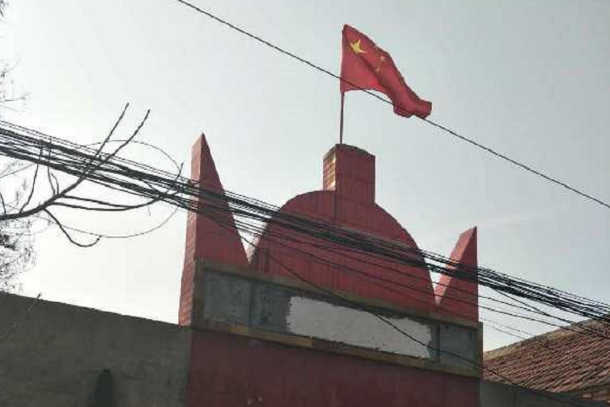 After the cross was demolished from the top of the front gate of the Huozhai Church in Qi Xian parish in Kaifeng Diocese, a Chinese national flag was hoisted in its place. (Photo supplied)

Many churches in China continue to be suppressed by local authorities in the lead-up to Christmas celebrations.

On the Dec. 16 Sunday of Joy in Advent, Father Stephen of the underground church in Hebei province could no longer rejoice as he was interviewed by government officials who asked him to cooperate with directives and "make friends".

"The head of the religious affairs bureau under the United Front Work Department came along with township and village cadres," Father Stephen told ucanews.com.

"When they arrived at the church, I had just given a homily at the Mass."

He added that the officials asked him for his phone number and gave him three days to consider their request.

Later, an official told him on the phone that he could celebrate Christmas first, but that on Dec. 27 he would be required to enter into discussions.

The priest said that, as the officials approached him in a courteous way, he had agreed to do so.

However, he intended to go to the meeting with several other Catholics in order to avoid any attempt to sow division.

Despite deciding to have a discussion, Father Stephen said he would only express his position that he would not join the government endorsed Chinese Catholic Patriotic Association (CCPA).

A source told ucanews.com that Father Stephen's name was on a list of 15 underground priests to be pressured into joining the official body.

But Father Stephen said that in fact there there are more than 20 underground clerics in his diocese.

Meanwhile, a convent in Qiqihar Diocese in Heilongjiang province in north-eastern China was forcibly demolished Dec. 19.

The convent was run by the Congregation of the Sisters of St. Teresa at Ping-an village.

Earlier the government had claimed that the building was illegally constructed and classified as an unlawful meeting place for the underground church.

While the nuns were appealing to authorities, officials of Gannan county in Harbin city forcibly demolished the convent.

It was alleged that two days before the demolition, police and other personnel had entered the convent at 11 pm and ordered the nuns to leave within an hour.

Bishop Wei Jingyi of Qiqihar and some priests had sought a solution, but were unable to stop the demolition.

In Henan province, a cross on the front gate of the Huozhai church in Qi Xian parish in Kaifeng Diocese was removed and immediately replaced by a national flag on the morning of Dec. 14.