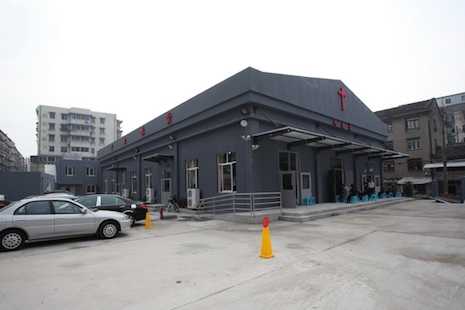 A temporary church in Wenzhou Diocese, consecrated on Oct. 27, features a cross that conforms to new provincial regulations mandating the size and placement of crosses. (ucanews.com photo)

Christians in China's Zhejiang province, where authorities have carried out a devastating cross-removal campaign, say they will remain vigilant amid signs that elements of the hard-line strategy could spread to other jurisdictions.

Although Christian leaders in the province say the cross-removal campaign has subsided since September, authorities across China have recently met to discuss the issue of "illegal" construction.

About 150 officials from housing and law enforcement departments across China attended a Ministry of Housing and Urban-Rural Development conference in Zhejiang's Yiwu city on Oct. 17.

Minister Chen Zhenggao told the conference to fight "a battle against illegal constructions" by learning from the experiences in Zhejiang, according to the Zhejiang Daily.

News of the meeting has alarmed Chinese Christians. More than 1,500 church crosses have been removed in Zhejiang since a campaign targeting illegal structures began in March 2013.

The campaign, dubbed "three rectifications and one demolition," was launched to "rectify" old residential areas, old factory areas and villages within cities, as well as to "demolish" all illegal structures.

Christian leaders in Wenzhou city, often known as the "Jerusalem of the East" because of its large Christian population, believe the state's cross-removal campaign has subsided. However, a Catholic source, who asked to remain anonymous, said: "We will stay vigilant."

A Protestant preacher, who identified himself as Luke, said he believed the scale and impact of church and cross demolitions in other provinces would not be as serious, since churches are particularly densely packed in Zhejiang.

The province has 2 million Protestants and 210,000 Catholics, according to estimates from the respective communities.

Though cross removals or church demolitions on the scale of what took place in Zhejiang may be unlikely, sporadic cases have already been reported.

On Oct. 9, about 100 Protestants protested in front of a government building in Xiaogan city, Hubei province, denouncing the demolition of their church. Local officials had claimed the church was built without relevant permits, while the demonstrators claimed that officials tore down the building because it was not built using their preferred developers, according to Radio Free Asia.

In Fujian province, government officials threatened to demolish an unregistered church in Mindong Diocese, where 80 percent of the 80,000 Catholics belong to the "underground" community.

Ying Fuk-tsang, director of the Divinity School at the Chinese University of Hong Kong, said the extent to which authorities in other jurisdictions target places of worship will be linked to the perceived growth of a religious community.

"Zhejiang's religions have been developing too quickly in the eyes of authorities. So they try to justify their action through removing illegal construction," Ying said in an interview.

"I believe they will use the same excuse in other provinces where religion develops fast, but a large-scale cross-removal campaign is unlikely."

A rule states that crosses must be painted in colors to blend in with church facades, and designed with specific height-to-width ratios.

Using these guidelines, local church officials in Wenzhou affixed a cross onto the facade of a new temporary venue, instead of erecting it on top of the structure. The new venue was consecrated on Oct. 27 as a substitute for St. Paul's Catholic Cathedral, which is under renovation.