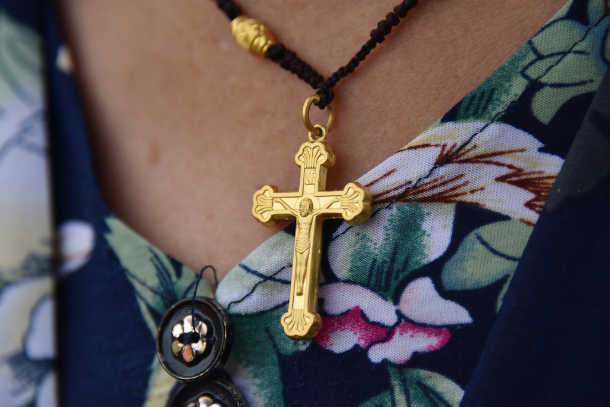 A worshiper wears a cross outside a Catholic church in Puyang in China's Henan province. The communist regime began to severely suppress Catholics in Henan last year and the persecution has since spread to Hebei. (Photo by Greg Baker/AFP)

As the Chinese government continues to suppress religious freedom, Christianity is facing the forcible removal of crosses and demolition of churches across the vast nation.

However, threatened by the authorities and fearing retaliation, some Catholic Church members dare not disclose what is happening to the outside world, causing a blackout of all news on the subject.

The communist regime began to severely suppress the Church in Henan province last year and since then the persecution has spread to the neighboring region of Hebei.

Church sources in the latter say they have been threatened by authorities and dare not reveal the true facts to the outside world.

The crosses of some churches in Hebei’s Handan Diocese were forcibly removed in May and since then all news about the demolition of churches has been blocked by authorities.

A local Catholic, who identified himself only as John, told ucanews.com that authorities had forbidden church members from discussing the incidents, warning they could expect to face reprisals.

He explained that the retaliation might include the demolition of more crosses and churches, even the detention of clerics. Such acts of retaliation had scared some pastors into silence, he added.

Father Francis from Hebei also pointed out that many churches in the province were facing demolition and redevelopment for other uses. However, he admitted that local Catholics and priests did not dare to release news and photos as they feared retaliation by authorities.

“Once relevant photos are released, even though the specific location is not identified, you know that the authorities will investigate and find out the source of the news. This is an insidious and cunning deed,” he told ucanews.com.

“Everyone wants to protect themselves. They [the government] want to make someone accountable for this. Even if it is just for show, they will spend a long time seeking revenge.”

Father Francis also noted that one diocesan leader was asked to surrender his passport and banned from going abroad after he refused to cooperate with officials.

Moreover, he added, one priest in central China faced retaliation because he referred during his homily at a Mass to a priest in a neighboring diocese who had been detained by authorities.

Father Francis said: “The priest wanted to do something for the Church but did not fully understand the regulations on religious affairs.

“After being reported [by a member of the congregation], he was suspended by the government, could not say Mass and had to write a review on his alleged wrongdoing, saying that he intended to exonerate the priest who was taken away.”

That priest, said Father Francis, was chairman of an association that was patriotic to China but after referring to the plight of the detained priest, he had both his church and residence searched by authorities.

The news blackout is not only imposed on those who live in mainland China. Overseas media outlets that publish “offensive” news are also severely suppressed, making it increasingly difficult for the outside world to know about religious persecution in the country.

Online magazine Bitter Winter, based in Turin, Italy, has paid special attention to religious issues in China and its staff have also been arrested and detained by authorities.

John believes these acts of retaliation are intended to strictly control news of religious persecution from being revealed to the outside world and to avoid the condemnation of the international community.

"Such deeds of ‘plugging one’s ears while stealing the bell’ by the Chinese Communist Party have just exposed that it has no respect for freedom of speech, beliefs and the press, seriously infringing human rights and abusively using violence to maintain its regime of dictatorship," said John.

Marco Respinti, director of Bitter Winter, said on June 23 that Chinese authorities had arrested 45 of his journalists and contributors in 2018 alone, with 21 remaining in detention.

He said that one article revealed that provincial governments in Henan, Zhejiang and other provinces had secretly ordered a serious crackdown on overseas media this year and a thorough investigation of their journalists, correspondents and friends in mainland China.

Respinti said: “Some of them were reported when they solicited news material. They had to abandon their work and flee to avoid being arrested by police.”

He told ucanews.com that some of the journalists were accused of participating in the infiltration of foreign forces, instigating the subversion of the state regime, leaking state secrets and other related crimes. No further details about these allegations had been forthcoming, he said.