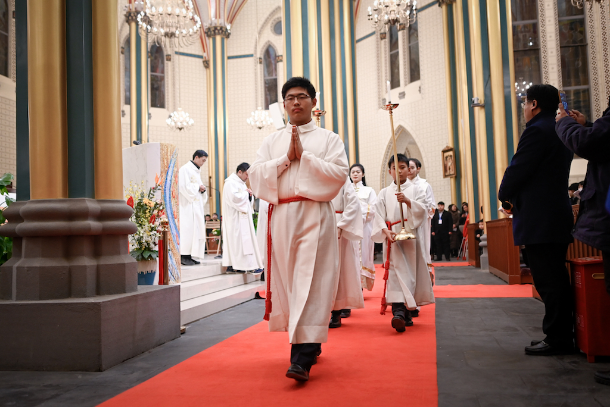 Chinese clergy attend Christmas Eve Mass at a Catholic church in Beijing on Dec. 24, 2018. Catholics in Henan province are concerned that a new appraisal system will penalize those who do not obey the government. (Photo by Wang Zhao/AFP)

Catholics in China’s Henan province are concerned that a new appraisal system for religious personnel is a front for political screening.

A Henan priest told ucanews.com that the provincial Chinese Catholic Patriotic Association and Catholic Church Committee approached him during Holy Week to seek to appraise him.

A few days later, he found the newly launched annual appraisal scheme with an assessment form on WeChat. “The appraisal is ridiculous,” he said.

Rules state that the appraisal should be started each December and finished before the end of the year. All clergy with the Chinese Catholic Religious Personnel Certificate issued by the two organizations are to be appraised.

The appraisal focuses on loving the China Church, patriotism, morality, law obedience, upholding canon law, performance, and knowledge of theology and social services. Each item is worth 10-15 points in the appraisal.

If the subject gets less than 55 points or violates religious regulations, he/she will fail the appraisal and will be warned or prohibited from carrying out his/her duties.

“Only those who can pass the appraisal are suitable to be religious personnel, otherwise their church affairs will be prohibited,” a Catholic commentator who identified himself as Ma Du told ucanews.com.

He said this kind of appraisal aims to kick out religious people who do not listen to the government.

“It equals political scanning. To verify religious personnel should be the right and power of a bishop. The measure is like the government management model but not the church system,” Ma Du said.

Henan is second only to Zhejiang in its number of Christians. The Catholic Church in Henan has nearly 300,000 faithful in 10 dioceses. Catholics in China's Henan warned not to cross 'red line'