Chinese Catholics will not gain freedom from a Vatican-China deal 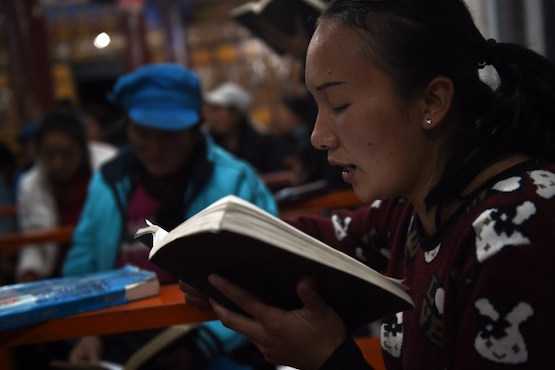 A file image of a woman praying at Nidadang Catholic Church in southwest China's Yunnan province. (Photo by Greg Baker/AFP)

Catholics in greater China were astonished by the rumors of the Vatican's attempt to take a step forward to China by concession.

An anonymous source confirmed that Vatican officials, with the approval of Pope Francis, asked two veteran and legitimate bishops in China to step down for the successions of two illicit bishops appointed by Beijing. The source also leaked the schedule of the Sino-Vatican deal on appointment of bishops to be made in spring this year.

Although such an agreement does not mean an immediate restoration of diplomatic relations between China and Vatican, it does not mean the Catholic faith in mainland China will enjoy greater extent of religious freedom, nor will the agreement promote reconciliation and unification of the church in the territory.

Any Sino-Vatican agreement on appointment of bishops is not equal to greater enjoyment of religious freedom.

The lack of enjoyment poses the most fundamental challenge to the Catholic Church and Christianity in the land. Religious freedom (freedom of religion) goes beyond the freedom to participate in religious activities and rites without state interference.

According to the General Comment No. 22 of the United Nations Human Rights Committee, freedom of religious practices includes "acts integral to the conduct by religious groups of their basic affairs, such as the freedom to choose their religious leaders, priests and teachers, the freedom to establish seminaries or religious schools and the freedom to prepare and distribute religious texts or publications."

In other words, religious freedom includes institutional autonomy of the religious organization in formation and selection of personnel.

However, it does not exist in the People's Republic of China. The "independently self-governed" religious policy of the Chinese Communist Party manipulates the Catholic doctrine of Apostolic succession through the appointment of bishops by the pope.

The policy breaks the theological and substantial connection of the Chinese Catholic Church from the Vatican and divides the Catholics who uphold the principle at the expense of their rights to religious freedom and those who choose to follow the party policy for their perceived good.

On the other hand, the Chinese Communist Party continues to tighten its control over the Catholic Church of China at multiple levels.

On a macro level, the State Administration for Religious Affairs, which shares the power to select and appoint bishops, the newly revised regulations on religious affairs and the Law of the People's Republic of China on the Administration of Activities of Overseas Non-Governmental Organizations within the Territory of China (the INGO law) compose the state infrastructure. While the regulation offers a legalized framework for the state to monitor the operation, donation and internet usage of the religious organizations under the veil of "Sinicizing religions," the INGO law, which was legislated for "national security," prohibits all unregistered NGOs from church ministries and subsidizing religious activities. Charitable organizations of the church are inevitably affected.

As a result, the Chinese government becomes much more "legitimate" to exercise its "overall jurisdiction" on the religious arena through administrative structure, the laws and regulations. The underground Catholic Church in China continues to suffer from losing its rights to practice faith under government surveillance with the regulations.

The Chinese Catholic Patriotic Association (CCPA) acts as the proxy of the Chinese government to manage the official Catholic Church in China. The CCPA is a product of the Communist Party's religious policy of an "independent, autonomous and self-run church," which serves to control the operation and development of the church at a micro level. It is not surprising that an authoritarian regime would establish pro-government "self-run" organisations to penetrate, divide and control civil society.

If religious freedom means the freedom from interference of the state in any forms, the existence of the CCPA represents a major battlefield. Otherwise, any agreement on the appointment of bishops between the Vatican and China would be merely formalistic, since the substantial practices which violate freedom of religion among Chinese Catholics remain.

A senior Vatican official, according to the news, says that after an agreement is made, the church "will still be like a bird in cage but the cage will be bigger." Comprehending different sources and reports, it sounds like an appeasement policy as the Vatican would concede her full authority of appointing bishops to let the Chinese government engage in the process.

From a theological point of view, the Second Vatican Council obviously declared that, to protect the freedom of the church, "in future no more rights or privileges of election, nomination, presentation or designation for the office of bishop be granted to civil authorities."

From a realistic perspective, it is not a wise move to concede to the Chinese Communist Party, which has a clear intention to extend its control over civil society. It can be revealed in the experiences of Hong Kong as a semi-autonomous region of China. Despite the joint agreement on "One Country, Two Systems" between Britain and China, the latter never ceases to seek an opportunity to intervene in religious affairs, especially the Catholic Church in the territory.

There were two major events revealing the CCP's attempt to penetrate religious freedom, in particular institutional autonomy in Hong Kong.

In September 2002, the Hong Kong government introduced a proposal to legislate Article 23 of Basic Law, which is the National Security Law. It aroused worries and discontent from various sectors including journalists, churches and human rights groups. Besides the worries that such a law would abuse freedom of speech and the right to public assembly, the Catholic Church had particular concern over the prohibition of connections with foreign organizations, which might halt its connection with the Vatican. Religious freedom would probably be at peril. The now-retired Cardinal Joseph Zen Ze-Kiun, who was inaugurated as diocesan bishop of Hong Kong at that time, actively spoke of his concerns and openly opposed the government proposal. At the end, more than half a million citizens protested against the legislation on July 1, 2003.

Despite the legislation being finally withdrawn after mass demonstrations, it illustrated the fact that since the time of the turnover, Beijing has had a strategy to cut the links between the local Catholic Church and the Vatican. In 2017, Beijing top officials repeatedly advocated the necessity of legislation on national security in Hong Kong under the spread of nativism and independence ideologies. It is foreseeable that the same government repertoire would be played.

Another statecraft was aimed at diluting the influence of churches in managing their schools. In 2004, the Legislative Council of Hong Kong passed the amendment of the Education Ordinance which introduced "school-based management."

Under the new criteria, a school's sponsoring body cannot appoint board members on its own. Representatives of different stakeholders like alumnus, parents and teachers must be included in the board. The new management structure, in the sight of the general public, looks more democratic and representative. However, it inevitably diminishes the influences of sponsoring bodies.

The Hong Kong Diocese was proactive against the proposal as an infringement of freedom of religion and institutional autonomy. According to the diocese, the autonomy of running the schools with their own methods is guaranteed by the Basic Law. The diocese then took a judicial review on the amendment. However, the diocese lost in 2011. In the following year, the Hong Kong government proposed compulsory national and moral education. People then realized that school-based management could be part of the state's curriculum push, even if the sponsoring body disagreed.

The final lesson from Hong Kong does not directly lie in freedom of religion but the tactics that Beijing usually adopts to persuade her counterparts to reach a deal. In 2014, with the rising support of the act of civil disobedience as a strategy to strive for democratisation, Beijing responded by proposing suffrage on the chief executive of Hong Kong with a tight screening mechanism.

Although each registered electorate could vote, their rights of being nominated and of running for election were conditioned by prior approval of Beijing through a highly controlled nomination committee. It was a proposal consisting of handicapped rights and political inequality.

Beijing is good at giving concessions to the edges while holding key matters to its advantage. Some media have reported that one of the proposed agreements between China and the Vatican would be giving recognition to the pope as the leader of the Catholic Church in China. But as aforesaid, without any agreement including the abolishment of the CCPA, there could hardly be genuine institutional autonomy maintained by the Catholic Church.

A ceremonial or formalistic agreement might ease diplomatic tensions between the two political states, but it is not a response to alleviating the violations of freedom of religion against the Catholic Church, especially the underground one, in all forms.

The "One Belt, One Road" initiative, in which China begins to expand its political and economic influences toward the international community, has caused worries and reservations in the West.

On the other hand, the rise of global authoritarianism led by China, Russia and Iran continues to threaten the protections of human rights and basic liberties.

The persistent deterioration of freedom of religion in China should inform the Vatican not to offer any appeasement to China. Any diplomatic concessions at the expense of Catholics, who are under repression due to their underground origin, and those defending religious freedom across the world, would only encourage the Chinese authoritarian state to continue its practice. The Vatican's stained moral integrity — brought on by reports of child abuse by clergy — would be further damaged.

Eric Lai is a former student leader and convener of the Civil Human Rights Front in Hong Kong. He is an opinion contributor and PhD student in law at the School of Oriental and African Studies, University of London. His research interests include religious freedom, democratization and social movements.