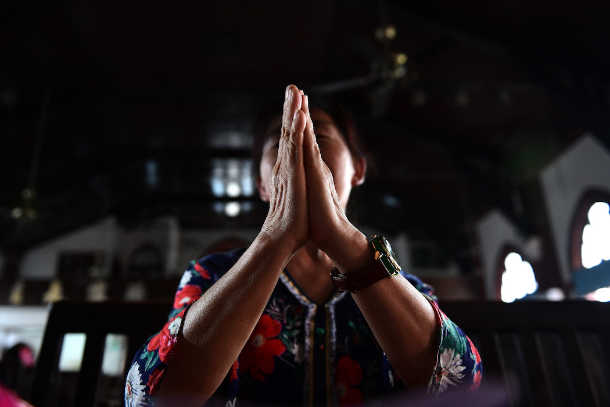 A woman prays inside a church in Wuhan on Sept. 23. The landmark deal between China and the Vatican is a win for Beijing, giving official recognition to bishops appointed by the government despite a crackdown on religion, and potentially softening the ground for full diplomatic relations after 67 years of estrangement, analysts said. (Photo by Nicolas Asfouri/AFP)

Chinese Catholics have given a mixed reception to the Sino-Vatican provisional agreement on the appointment of bishops that has seen Pope Francis recognize seven Chinese bishops ordained without his mandate.

Father John from the underground community of Mindong Diocese in Fujian province said there is now no reason to refuse to concelebrate Mass with the illicit bishops recognized by the pope, otherwise "there is not any obedience. We cannot be irrational." He stressed, however, that "being obedient does not necessarily mean agreeing."

He said the underground community can no longer exist and only the open church is recognized but he pledged that he will never join the Chinese Catholic Patriotic Association (CCPA). "I will go home when I become too aggrieved being a priest," Father John added.

Francis from an open community in Hebei province told ucanews.com that he does not agree with the signing of the agreement between China and the Vatican.

"China is now suppressing religions severely. [The regime] does not only remove crosses but is controlling strictly the dissemination of religious information on the internet. There is no freedom of speech," he said.

"I will not attend Mass celebrated by priests who agree with the agreement and will continue to boycott those seven illicit bishops. If the entire church on the mainland becomes degraded, I will only stay at home to pray."

He said that he can only keep his own faith and cannot be assimilated like pro-government members of the public. He stressed that "when the church is assimilated by the devil, then that will be the time that we act according to our own conscience."

Mary from an open community of Jiangxi Diocese said she was very concerned about the agreement. She could not accept the clause that bishops will be nominated by the government and lead the church. "I cannot accept the submission of the church to the regime. I think the pope is wrong this time."

Regarding the seven illicit bishops recognized by the pope, she said "it touches the principles of the church. When there is a priest having a mistress here, I will not go to church then. I can still follow Jesus at home."

Pietro Pan from an underground community in Shangdong province said the pope sharing his authority of nominating bishops with a government is indeed handing over the church to the government. "The church then fails to be one and most holy," he said.

He admits that he could not understand why the pope is recognizing the illicit bishops. "Would it imply that the decisions the church made earlier were wrong? There are some among them who have mistresses and children. Can they still be bishops? It is incredible. What is going through in the church that makes it capricious? Is this still the church of Jesus?" he asked.

He stressed that he refuses resolutely to participate in activities related to the illicit bishops as well as sacraments celebrated by their priests.

Paul of an underground community in Shijiazhuang in Hebei province denounced the agreement, saying that this is obviously a selling out of the church. The church is submitting to an atheist regime. "The pope recognized the seven illicit bishops," he protested, adding that "when people having wives and children can be bishops, so can I?!"

Joseph Zhou from the underground community of Nanyang in Henan province believes that the agreement allows both parties to take a step forward. Yet he remains cautious and pessimistic regarding the future. He hopes that authorities will now release arrested bishops and priests and allow them to carry out their pastoral ministries.

Responding to the rumor that underground communities will be eradicated, Joseph believes that would be difficult to achieve. He hopes that the government may recognize underground churches.

Father Paul from an open community in Guangdong said the church in China has almost reached the lowest level in faith matters, including marriage and family problems and behavior of the clergy. He has been longing for an agreement so that "the Holy See can deliver faith and pastoral messages more directly to the China Church, especially on how to manage priests."

As the new bishops will require the appointment of the pope, he explained, it is hoped that the quality of the pastors will be raised, which will contribute to the standardization and normalization of the China Church.

Paul Wang, a CCPA member from Baotou in Inner Mongolia, said he obeyed the pope. "This is the result that everyone has been awaiting for a long time. This is the fruit of the Holy Spirit. It is hard to come by."

Although the church is still suppressed, he believes that will end soon. "I believe President Xi Jinping is a good secretary-general [of the Communist Party]," he said.

Speaking about the demolition of crosses, he said that it mainly takes place in Protestant churches and is not much related to the Catholic Church. "The pope is great and intelligent. He is chosen by God. He cannot be wrong as he represents God," Wang said.

Paul Xiao from the open community of Cangzhou Diocese in Hebei province said he will observe how the church is affected.

"The suppression is not really suppression of the church. It is only a sign that the state has started formally to execute the laws and regulations," he said, adding that he will still participate in church activities. "I believe that the decision the pope made is not wrong. The government will not persecute us either. The government is constantly revising the law that makes things more standardized."

Maria Zhang, a CCPA member from Taiyuen of Shanxi province, welcomes the pope's decision. She believes that "the pope is the wisest." She claimed that she did not feel she was being suppressed, "at least not in my place here." She thinks that it is those churches causing problems that lead to the discontented government demolishing crosses.