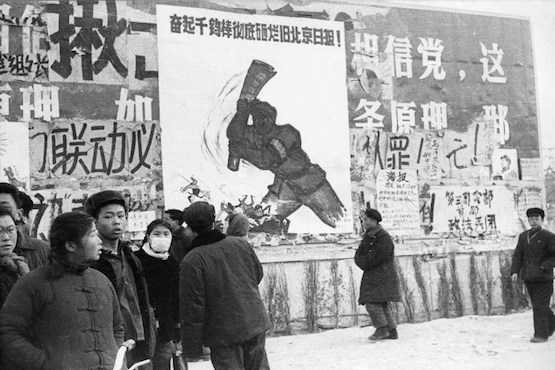 Chinese youth near revolutionary placards in downtown Beijing, during the "Great Proletarian Cultural Revolution," February 1967. During the 10 yearlong revolution all of China's Catholics were forced into hiding. (Photo by AFP)

Catholics recalled the horror of the Cultural Revolution with dread and relief as the Communist Party's main newspaper — the People's Daily — broke Beijing's silence to mark the 50th anniversary of the day that kick-started a decade of political chaos.

Although the party did not cover new ground, it urged Chinese to "fix in our memories the historic lessons of the Cultural Revolution" in a commentary, published online late May 16, as other media in China mostly failed to mark the anniversary.

In interviews with ucanews.com, Chinese Catholics shared memories of persecution during this decade of bloody turmoil, a reminder that although many religious groups in China complain of recent regression by the party, improvements over the past half a century remain intact.

"We know a priest in a neighboring village who was beaten to death. I asked a villager who was married in our village but she refused to talk about it," said Joseph Shi, a Catholic layman from Hebei province, home to 1 million Catholics, the most in the country. "Who would want to recall it?"

The priest in Joseph's village was made to sweep the streets by day and face harsh public criticism by night as most Catholics hid their faith for fear of persecution.

Much of the suffering and bloodshed suffered by the Catholic Church has been obscured by the party as it went about containing fallout from the Cultural Revolution after it ended in 1976, the year of Chairman Mao's death.

Recent books have begun to shed light on the full extent of the suffering endured by the church, including the Red Book of Chinese Martyrs by Italian author Gerolamo Fazzini that sources previously unpublished Catholic diaries from the period.

"During these periods of the dark night of my soul, caused by the mental and physical stresses of the communist persecution, I suffered so much that I thought there could not be anything worse," wrote Father John Huang Yongmu, a priest who spent the Cultural Revolution in a factory in northern China where 1,000 detainees committed suicide.

In echoes of enduring problems facing the Chinese church today, the clergy were forced to renounce the Vatican as an outside, corrupting force against communism. Religion only existed inside the faithful during this period as overt worship was all but banned.

"Even those who signed to accept an independent church could not save themselves from suffering, as was the case with all religions," an underground Catholic told ucanews.com on condition of anonymity.

Chinese have become increasingly weary of creeping signs of a return to Maoism under President Xi Jinping, not least after Beijing's Great Hall of the People staged a concert of "red songs" including anthems from the Cultural Revolution earlier this month.

Despite signs of a growing personality cult built around Xi, the president's experience of being banished to toil in the countryside will surely serve as warning that history cannot be repeated, said a priest in Shaanxi where Xi was sent during the Cultural Revolution.

"Half a century has passed and there are still some comments, some forms of memorial and even some people with ulterior motives who are pushing for a comeback [of the Cultural Revolution]," said the priest. "But I believe he [Xi] won't allow this comeback."