China's episcopal netizens ahead of the pack in Asia 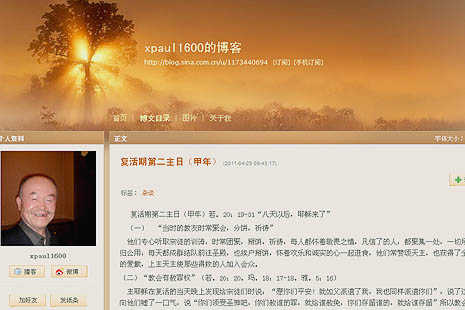 Ahead of the first-ever blogger meet at the Vatican on May 2, ucanews.com bureaux around Asia have provided a peek into blogging culture in the continent with all its varied social and political systems. The Philippines Bishops Conference site proudly displays 10 blogger bishops and Indonesia has its “internet archbishop” who puts up lots of entertaining stories and photos on http://pujasumarta.multiply.com/journal/ but it was China bishops who took the blogger prize! “I was amazed to see mainland China’s ‘underground’ bishop, possibly the oldest episcopal blogger in the region to stay connected to the cyber world,” says Hong Kong-based Lucia Cheung, ucanews.com's China office chief. “A few prelates in Greater China have their blogs but do not update every day. They are all in Chinese and thus they are not noticed,” she says. In mainland China, senior journalist Cheung says, “we have carried two stories in connection with the blog of Bishop Paul Xie of Urumqi who is not recognized by the government. He is 80 now. He was a netizen already when I first met him when he was about 75 of age.” He is wise to use the blog as a mean for pastoral care and evangelization in his diocese that covers the whole Xinjiang Uyghur Autonomous Region, which size is bigger than some countries, she notes. “There are at least two other Mainland Chinese bishops who have blogs with pseudonyms,” she says. Explaining Chinese blog culture Cheung says, “In China, there are a lot of Catholic bloggers, including many priests, because they face more restraints from owning a website. They find that they have greater freedom to post news or write what they think in their own blog. Of course, they know there is censorship of these blogs too.” In Hong Kong, Cardinal Joseph Zen has his blog “Old Yosef” which he set up after he retired as Bishop of Hong Kong in 2009. The blog is his platform to dialogue with young people and to say something that he does not want to be misinterpreted as an official stance of the HK diocese or causing any pressure to the diocese. As for Taiwan, Bishop Philip Huang Jaw-ming of Hualien is known to be an active blogger. CathNews China, a Chinese service of UCAN, set up three blogs at different times, all in the name “Wenjiuzhou,” for mainland China readers since its ucanews.com website was blocked in March 2010. The latest one is http://blog.sina.com.cn/wenjiuzhoucnc Cheung reveals “our readers find it a lot more convenient to read from our blog because they do not need to pass through the Great Firewall to read it and could repost it to their own blog by just a click of button.” "It's a good thing to have the blog as the CathNews China’s auxiliary news channel, as it is free. When our first blog was closed down without prior notice from the internet portal operator, we could set up another new one immediately without extra cost, unlike running a website. Of course, it means more work for us as we have to manage more than one site.” CH14032