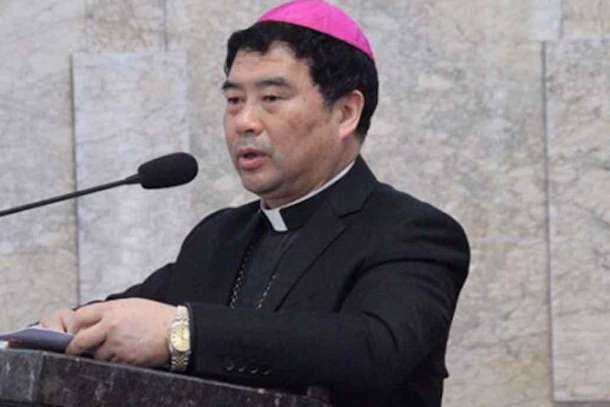 Auxiliary Bishop Vincent Guo Xijin of Mindong announced his resignation on Oct. 4, a week after the Vatican and China announced plans to renew their agreement on bishops' appointments. (Photo supplied)

A Chinese bishop has resigned after the Vatican announced plans to renew its pact with China in a move which observers say is a setback to China's hopes of implementing the deal smoothly.

Auxiliary Bishop Vincent Guo Xijin of Mindong announced his resignation on Oct. 4 and said he will no longer participate in public activities.

Two years ago, soon after the Sino-Vatican agreement on bishops' appointments was signed, Bishop Guo accepted demotion to an auxiliary bishop.

That decision was to accommodate Bishop Vincent Zhan Silu, an excommunicated bishop whom Pope Francis accepted back in the diocese, reportedly as part of the agreement.

An online letter being circulated in the name of Bishop Guo said he was resigning in view of the "signs of a new era, a new chapter for the Church, and particularly in the Diocese of Mindong."

"In such a colorful and diverse moment in history, we need handsome men with great talent, wisdom, virtue and university knowledge of the times to keep up with the times, to keep pace with the times, and even to lead the times," said the unsigned letter.

It said he was "stupid by nature, old-fashioned and ignorant, a herdsman born in a poor village in western Tibet, with no talent, no virtue, no wisdom, no ability, and no knowledge" and said the decision to resign was presented to the Vatican last month.

An observer, who did not want to be named, said Bishop Guo's resignation is linked to controversial changes brought to Mindong Diocese by the Vatican-China deal signed in September 2018.

He said Bishop Guo resigned because of inconsistent instructions from Rome. "From the time the agreement was signed, Bishop Zhan Silu could not interfere in underground church affairs. At that time, Bishop Guo had complete power, and then, suddenly, he has no privileges … and so on. These left Bishop Guo at a loss."

With these developments, those priests who have not joined the open church are likely to face even greater pressure from both China and the Vatican, the source said.

"Bishop Guo's resignation is not only a serious setback for China's claimed smooth implementation of the agreement but also shows the failure of the Vatican's strategy for dealing with the Church in China," the observer said.

Wang Wenbin, a spokesperson for China's Ministry of Foreign Affairs, told media in late September that China was poised to renew its agreement with the Vatican.

He said the temporary agreement signed in September 2018 to appoint bishops with papal approval has helped the Church grow healthier in the communist country.

"Thanks to the joint efforts of both sides, the agreement has been implemented smoothly, and the Catholic cause in China has developed healthier," he said.

But underground Catholics, who do not accept the state-run church, say the government's harassment and atrocities against them have increased since the signing of the agreement in an attempt to force them to join the open church.