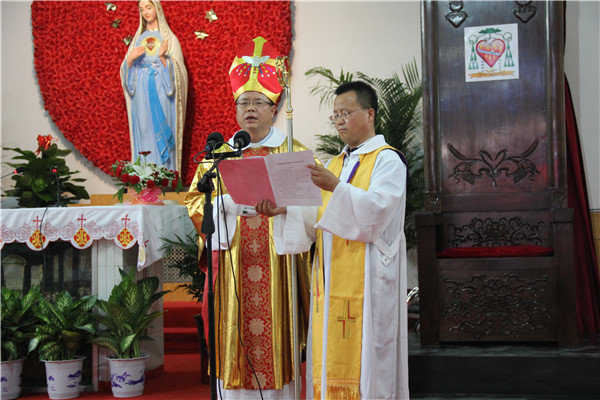 Bishop Martin Wu Qinjing of Zhouzhi (left) reading out his oath at his installation.

Bishop Martin Wu Qinjing of Zhouzhi, secretly ordained in 2005, has now been installed with government recognition after being prevented from undertaking his episcopal ministry.

His installation held July 10 at the Immaculate Heart of Our Lady Cathedral in Zhouzhi was presided by Bishop Yang Xiaoting of Yulin (Yan’an), a vice chairman of the bishops' conference, and co-presided by Bishop Anthony Dang Mingyan of Xi'an. Both bishops are from Shaanxi province. There were also 73 priests at the Mass.

“The atmosphere inside the Church was fine while it was tense outside as there were a lot of security officers and plain clothes (police) around,” a Zhouzhi diocesan source who does not want to be identified told ucanews.com.

“The installation was a pure political act,” said another source who attended the ceremony and identified himself as Joseph.

“Everything on the surface seemed smooth for Bishop Wu. But on the eve of the installation, almost all the priests were under government control,” Joseph said.

“Each priest could only bring three Catholics along and they had to stay at the same guesthouse and were then sent to the cathedral together the next day,” he said.

“Inside the cathedral, officials checked everything from electricity, audio system, meals, to all the speeches and displayed banners before the ceremony started,” he said.

The congratulatory tablet sent from the bishop's hometown parish was not allowed to shown publicly because it had the words ‘defend the faith, loyal to Christ,’” said Joseph.

A letter of approval by the bishops' conference — not recognized by the Vatican — was read out at the ceremony in the presence of religious and United Front officials from the provincial government and Beijing.

The general requirement for a secretly ordained bishop to obtain government recognition is to concelebrate Mass with an illicit bishop who is ordained without papal mandate, and to join the Chinese Catholic Patriotic Association, a government-sanctioned body designed to control the Church.

Ucanews.com approached the two bishops but they refused to confirm.

Attempts to get a Vatican confirmation that the installation occurred with its approval were unsuccessful.

“This was known by many now,” said the diocesan source. He believes it will not cause a split in the diocese even though it may cause some confusion for some moment.

Bishop Wu, a priest of the official Church, was secretly ordained with Vatican approval after he returned from his studies in the United States in 2005. He revealed his episcopal status to his priests on May 22, 2006.

He was then interrogated by the government and later abducted by a group of unknown men from the cathedral in September 2006 but was released after five days.

In March 2007, he was summoned to a learning class but did not return since. It was later discovered he was under house arrest at the minor seminary in Xi’an diocese.

In recent years, surveillance on him was loosened. He could meet guests and celebrate Masses privately. But he was not allowed to return to his diocese until last year.