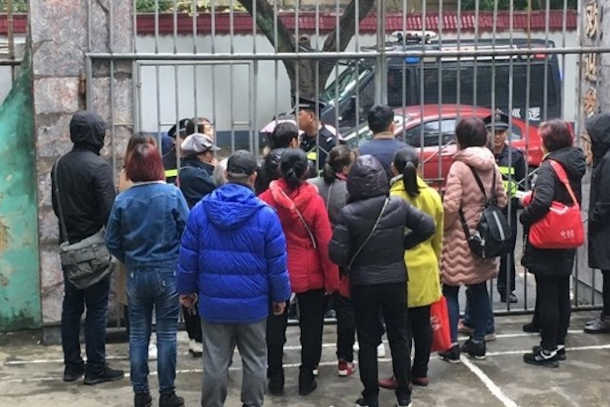 Priests and the faithful block Sacred Heart Church's main entrance on Dec. 28 to prevent a developer from entering. (Photo supplied)

A Chinese bishop has been accused of embezzling church money and of owing huge debts after a property investment failure.

More than 200 priests, nuns, church personnel and Catholics of the diocese have sent a joint letter to the municipal ethnic and religious affairs committee requesting a thorough investigation of the bishop's finances.

A copy has been sent to the municipal party committee of the United Front Work Department. Bishop Tan is the statutory legal representative of the municipal Chinese Catholic Patriotic Association.

The letter accuses Bishop Tan of using church finances "assertively and peremptorily, putting the relevant national financial and economic laws and regulations behind."

The diocese's financial situation is no longer sustainable for maintaining the normal operation of its pastoral work or to pay the basic living expenses of clerics and church personnel, the letter said.

"The diocese has not been able to pay basic living expenses, medical insurance and pension premiums since last August and could not even afford the medical fees of a diocesan priest who has been seriously ill," a source called John told ucanews.com.

According to open church authorities, Guangxi is one diocese under the governance of Bishop Tan, who was recognized by the government in 2003. However, the Holy See maintained its original position that Guangxi has four dioceses and Bishop Tan is only the primate of Nanning Diocese.

The faithful decided to sue the bishop last month after finding that he had agreed to let a property company rebuild Sacred Heart Church in the diocese and sell the new building.

Peter, another source, told ucanews.com that the bishop without the authorization of the church signed a construction contact with Nanning Qiai Property Service Co. last October to rebuild the church.

Bishop Tan mentioned the project to the parish pastor, several diocesan priests and other Catholics, but nobody was aware of exactly what had happened until unfamiliar people were seen coming in and out of the church after Christmas. Banners outside Sacred Heart Church protest about the sale of church property and demolition of the church, while (right) is a projected image of the rebuilt church. (Photos supplied)

Some faithful learned that the bishop wanted to rebuild the church and sell part of the new building.

It was planned to extend the three-story church building to 20 floors. The second floor would house the church and the fourth floor would be a residence for priests and nuns. The other floors would be used for stores, apartments and a sky garden.

"Even the church would only be used by us on Saturdays and Sundays, while on other days it would be operated by a wedding company," Peter said.

The unit rate is allegedly more than 7,000 yuan per square meter. Peter said units on the ninth to 11th floors have all been sold out. Buyers have paid 110,000 yuan as a down payment.

Peter said that the property company will manage the whole building as a small community and buyers have rights for 53 years. "It means that several generations of a family can live there. It could be said that the bishop has sold the church," he said.

On Dec. 28, after priests and lay people learned about the contract, they blocked the main entrance to prohibit the developer from entering the church and called the police.

On Jan. 5, large construction machines approached the church but lay people asked the government to intervene.

On Jan. 6, officials from municipal ethnic and religious affairs committee ruled that the church could not be demolished.

The next day, construction workers moved away from the church. But John stressed: "The matter cannot be resolved like this."

Peter said apartment buyers have come to the church asking for refunds. "We take them to the police station because the church could not help the bishop pay off his debts."

John said the bishop is head of at least five companies and has shares in more than a dozen other companies. "And he has personally owed tens of millions of debts as well," he said.

"We are heartbroken to see priests and nuns living without any basic living expenses," he added. 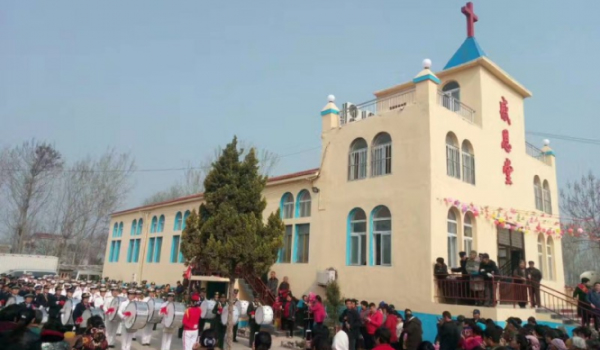