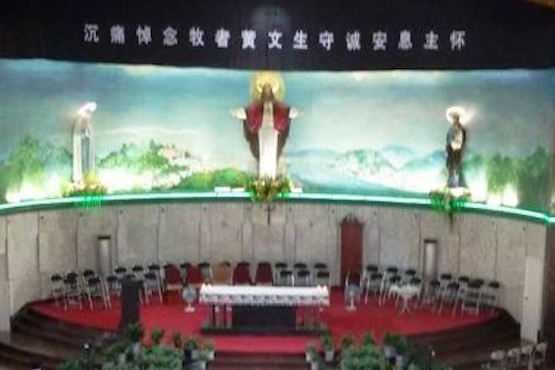 The banner hanging above the altar says "pastor" instead of "bishop" in addressing underground church Bishop Vincent Huang of Mindong who died July 30. (Photo supplied)

Chinese authorities will impose restrictions on the upcoming funeral of Bishop Vincent Huang Shoucheng of Mindong in eastern Fujian province who passed away on July 30 at the age of 93.

Bishop Huang was part of the underground church and was not recognized by the Chinese authorities who will not allow the funeral to be held in the name of the diocese.

As part of this, the late prelate cannot be dressed as a bishop or addressed as "bishop" but only as "pastor."

Attendees of the Aug. 2 funeral at Luojiang Church will be limited to 3,000 while Coadjutor Bishop Guo Xijin, who automatically succeeded Bishop Huang, is forbidden to preside over the funeral Mass as bishop but only as a priest, according to church sources.

However, a source who asked not to be named expected attendees to the funeral would definitely exceed that number.

Laypeople have already defied the ban by "creating a mitre and a staff with flowers and plants," said the source, adding that "this creativity is unprecedented."

Bishop Huang was born on July 23, 1923. He was ordained as a priest in 1949 (the same year the communists seized power) and then served as a parish priest until he was forced to return home in 1952 due to political turmoil.

He was arrested three times in his life and was locked up for a total of 35 years by the communist authorities.

In 1955, he was arrested along with four other priests and sent to a labor camp. He was released in 1971 but was soon sentenced to another eight years for compiling religious books. His last arrest was in July 1990; he was released for medical treatment a year later. He became Bishop of Mindong in 2005.

"He built a strong basis for the diocese by providing formation to a great number of priests and nuns. He also suffered a lot for his faith," said the church source.

The late bishop, who had been ill since May, was remembered as a man of prayer and of vision. "He was very humble and wise and above all, a good shepherd," said a priest from Mindong who is serving overseas.

Future of the diocese

The late bishop's successor, Bishop Guo was born on Dec. 20, 1958. He was ordained a priest in 1984 and became a diocesan consultor and seminary rector in 1988 when he began a dialogue with the authorities. Still, he was arrested in 1990 and detained for two years and again, for three months, in 1993.

The open church community is led by Bishop Zhan Silu, who was ordained without papal approval in 2000. Bishop Zhan is one of eight illicit appointments that China and Vatican would like to settle in their negotiations and whom Pope Francis wishes to pardon on the occasion of the Year of Mercy, according to an investigative report by Reuters on July 14.

The challenge for negotiations is that the Vatican does not want the illicit bishops to stay in their dioceses while it is unclear if Beijing would accept such a proposal. So far it’s unclear how Bishop Huang’s death will affect the diocese.

"We just roll with the punches," said the local church source. "Whether there is a smoother future ahead under improved China-Vatican relations or we have to face greater hardships, it doesn’t matter. We will rely on God."