Cross removed from a third Christian house of worship 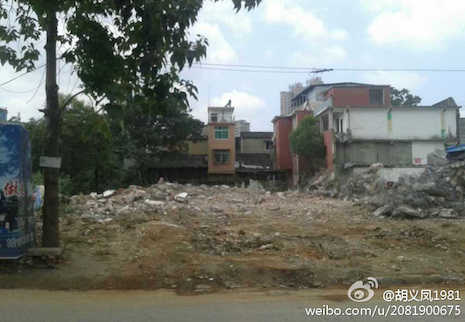 Our Lady Church in Jingdezhen lies in ruins after it was leveled to the ground on Monday (Photo: Weibo)

Two Catholic churches in two neighboring provinces in China were demolished this week while a third in Zhejiang province had its cross removed.

On Monday, Jinxi Catholic Church in Hunan province was forcibly destroyed. When the priest tried to block the demolition, he was handcuffed and taken away.

The government said it needed the land for a development project and promised to build a new church in the same township ahead of the demolition, Bishop Methodius Qu Ailin of Changsha (Hunan) told ucanews.com.

“Though the new one is now built, we haven’t renovated the rectory and the worshipping area is still not ready for use. The authority promised to provide temporary shelter for us and asked our priest to sign an agreement on August 1. But before things materialized, the authority broke its promise and demolished the old church,” he said.

Bishop Qu, who was notified that his priest had been detained, managed to secure his release the following day. “The officials have apologized. The priest is now staying in a hostel but we still haven’t received a temporary worshipping place as promised.”

In Jiangxi province, east of Hunan, the Our Lady Church in Jingdezhen was demolished just after midnight on Monday.

The incident was shared in a pair of anonymous reports that have since gone viral online.

A Church source in Jiangxi who spoke on condition anonymity confirmed both reports were true.

One, signed by “Catholic Church of the city,” reported that parish priest Father Dong Guohua was tricked by Religious Affairs officials into leaving the church on September 14 in order to discuss a reconstruction.

After dining with five officials, Father Dong stayed overnight in a room they reserved for him. At midnight, he received a call from his neighbor that the church had been leveled.

Some religious articles and furniture were moved out before the demolition but “the tabernacle was damaged by the bulldozer and buried among the debris,” the report stated.

The other report was undersigned by the “door guard of the Church”. He said a mob abducted him that night, forcing him into a vehicle.

The mob leader told him that he would be safe if he cooperated and that he would be freed when the time came. The vehicle then drove around the city and dropped him off around 6:30am on Monday. When he returned to the church site, he found only ruins.

In a third incident also on Monday, Jingtou Church of Wenzhou diocese in Zhejiang had its cross removed.

“Laypeople came to protect the church since the parish received a removal notice in late July. They even damaged the bridge that leads to the church to prevent bulldozers approaching,” said a Wenzhou Church source.

The government then installed surveillance cameras in the area to wait for an appropriate time to take action.

After some negotiations, the parish finally agreed to let the authorities take down the existing cross, which was judged illegal; they were allowed to install a smaller one afterwards, he said.