Sources say some church staff have also been detained 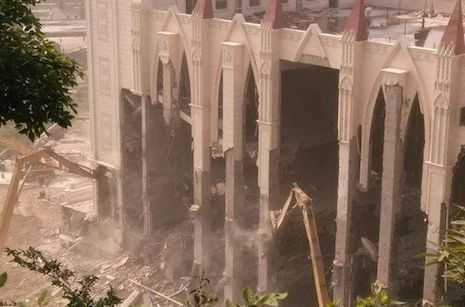 Demolition begins on the main sanctuary of Sanjiang Church in Wenzhou

Chinese authorities on Monday began demolishing the main sanctuary of the Protestant Sanjiang Church in Wenzhou after nearly a month-long standoff with congregants over the legality of the structure.

Since early April, congregants had stood watch over the structure amid fears that authorities would remove a giant cross on the top of the main sanctuary, as local sources say the government had issued orders for the removal of 14 other crosses from churches in and around the area.

“Roads leading to the Sanjiang Church were blocked this morning. Armed police and officers from the Special Task Force were dispatched to the district,” said a Protestant source who asked not to be named.

The source added that security forces have also made several arrests.

“At least five Sanjiang Church leaders as well as Xu Kede, a pastor at the nearby Tengqiao Church who visited Sanjiang over the weekend, have now been detained,” the source said.

Since last week, at least 3,000 congregants took up residence in Sanjiang Church to prevent authorities from removing the sanctuary’s cross.

Church officials had been negotiating with local authorities, who argued that part of the complex had been built illegally on farmland it did not own. The church agreed to remove four storeys of the six-storey annex by April 24.

In response, they began removing four of the six storeys of a church annex behind the main sanctuary. However, a further requirement to remove the church’s cross because it was “too big” scuttled the dialogue and drew congregants to the complex to defend the “symbol of their faith,” the source said.

In retaliation, local authorities began detaining church staff and last week prosecuted one of the church’s pastors for illegally occupying the farmland on which part of the church stands.

The source added that authorities also threatened local businesspeople who supported the church with closure of their offices if they continued to support the congregation.

Another source who also spoke on condition of anonymity said the main aim of the authorities seemed to have been the removal of the cross.

“Their real aim was to remove the cross.”

News of the demolition follows a report last week of the growth of Christianity in China, which led a Central Party member to deny the report.

In response to reports that Christianity could become the majority religion in the country, the party’s former head of religious affairs, Ye Xiaowen, told state-run Global Times that the claim was exaggerated.

“It is completely meaningless to predict how many people might believe in Christianity in China in the future,” said Ye Xiaowen.