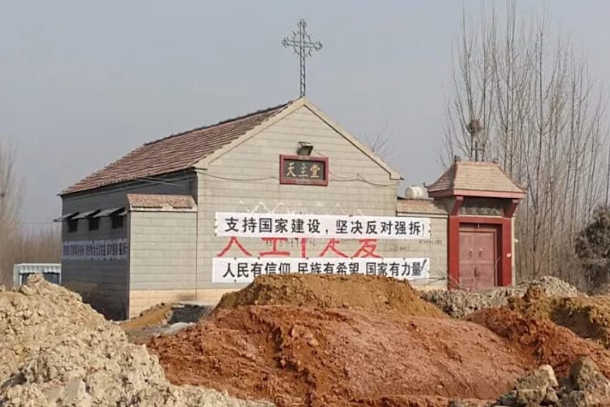 Before the demolition of Liangwang Catholic Church, church members hung a banner saying "We support the development but strongly protest the demolition. People are in faith, the people can have hope and the country can have power." (Photo supplied)

A second church has been demolished by authorities in China's Jinan Diocese in Shandong province — and a third church is expected to suffer the same fate soon.

After Liangwang Catholic Church was demolished on July 17, local Catholics prayed at the site and protested the unreasonable behavior of authorities.

All three churches were in normal use and legal churches officially registered with the religious administration, according to a source in Jinan.

Liangwang Church was built in 1920. During the Cultural Revolution, it was classified as a private house. After lengthy legal procedures, the church was rebuilt in 2006.

At noon on July 17, three female church members were on duty at the church when more than 40 people forced their way in, searched the members, took their mobile phones and made them leave the church.

Another 30 people later arrived to help with the demolition, which went ahead despite the church still containing many items.

The church was built on land that was distributed by Liangwang village and had been granted a permit for legal activities. It was demolished because its area in Pian district is to be developed with new buildings and infrastructure.

After the demolition, the parish priest and president complained to authorities but have not received any reply.

"The stools, altars and dedication boxes were all pressed into the ruins. The ruins later became a fire and all the items were burned out," said a church member.

After learning of the plan to demolish the church, members had tried to get permission from authorities for it to be rebuilt elsewhere, but the church was destroyed before any agreement was reached.

Sources said the district office had promised to give the church compensation and temporary premises in a house but that offer had not materialized.

Church members went to the ruins on July 23 to pray for a successful appeal and to protest the demolition.

One member believed that demolishing the church and its cross was no different from digging ancestors' graves in the feudal era.

"Can you imagine the pain and sorrow when you watch your ancestral grave being dug and your ancestors' bones smashed into ash?" he asked.

"Is it necessary for the government to do this? Church members just want to have a small area to build a small new church in the vicinity without affecting the development."

The recent crackdown on various Catholic and Protestant communities in China is the result of more than two years of organization and preparation at provincial, city and county level through the Chinese Communist Party's increasingly powerful United Front Work Department, according to Hong Kong academic Ying Fuk-tsang.