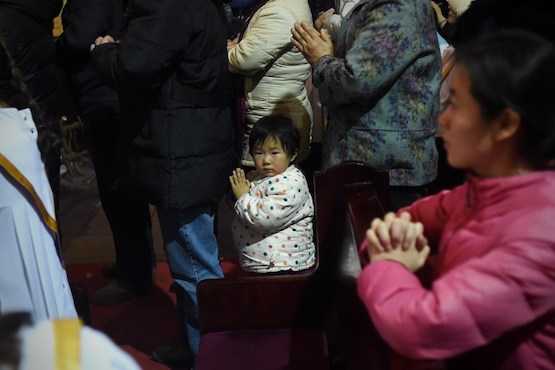 A file image of a young Chinese Catholic attending Christmas Eve Mass at a Beijing church in 2014. (Photo by Wang Zhao/AFP)

Communist authorities are continuing to tighten their grip on practicing Christians with at least four regional governments across China issuing notices that restrict children from joining Christian groups and attending religious activities.

The ban includes turning children away from churches even if they attend with their parents and teachers. Additionally, the ban includes promises that officials will launch investigations into both government approved churches and underground congregations who operate outside the tightly controlled official Beijing-run Catholic and Protestant churches.

The latest move comes as part of a concerted crackdown on religion that began with a three-year cross removal campaign in the Christian stronghold province of Zhejiang. The state's move against religions became official last year when Chinese leader Xi Jinping instituted formal plans to "sinicize" religion with the intention of bringing more religious followers under the control of the ruling Communist Party, which itself is officially atheist and forbids members from practicing.

"An emergency notice from the higher authorities strictly forbids all secondary and primary school teachers, students and toddlers to join Catholic or Protestant churches," the school district of Yonglin in Wenzhou, eastern Zhejiang, said in a note to all primary schools, adult educational institutes and kindergartens.

Maria, a Catholic laywoman in the district who identified herself by her baptismal name, told ucanews.com that about a week ago her daughter's teacher sent an audio and written message to the parents' chat group "asking us not to bring children to the church."

The teacher indicated the education bureau issued that instruction while adding that an inspection team would launch open and undercover investigations on Sundays to find out how many children went to the church.

On Aug. 12, the local street committee office also sent officials to churches to persuade parents not to take their children there. However, Maria said, there were still many children participating in the procession for the feast of the Assumption of Mary, one of the four most important feasts for the China Church, on Aug. 15.

In another incident,  a church-run summer camp that two Protestant classmates of her niece attended, was eventually disbanded and all participants sent home, Maria said.

"The move by the authorities is unnecessary. Even if they are not allowed to go to church, we parents can pass on our religious belief to our kids at home," Maria said while admitting that recent events had her concerned.

Ouhai district in Wenzhou also issued a similar notice that children were not allowed to attend churches. "Minors receiving religious education and formation too early in churches would seriously affect the normal implementation of the education system," the notice said.

A parallel situation was reported in Inner Mongolia Autonomous Region in northern China. Maria was told by a friend there that religious officials banned a summer camp run by the Catholic Church in Wuhai, Bameng Diocese.

"A woman official asked laypeople about the summer camp there without revealing her identity but she said she would like her son to join it. The Catholics did not know it was a trap and told her all the details," said Maria.

"Religious officials then questioned the priest. The priest initially denied it but after officials revealed what they knew, he was forced to disband the camp," she said.

According to Chinese media reports Changsha, the capital of central Hunan province, held an emergency video conference in June discussing how to stabilize work in the education system. As part of that, Liang Guochao, head of the Education Bureau, stressed making a "decisive effort to prevent religions infiltrating into schools and to guide students to consciously resist religious cults so as to make the campus a piece of pure land."

In neighboring Henan province, a document "Separating Education from Religion" was issued in July reiterating the decades-old communist policy of not allowing any religions to run study classes, Sunday schools, and summer camps for minors, and stopped any such activities immediately.

The document spoke of the trend of secularization of universal education and noted that even those higher institutes run by religious groups have turned secular and independent from religions.

In an article published on Tianzhujiao Zaixin, a popular Catholic site in China, a writer named "Father Lu" said religious officials told him that the document was issued by the provincial United Front Department, an opaque organ of the Communist Party that liaises with religious groups as part of its operations.

Father Lu said he was asked to attend a government-run learning class about the document so that no one would interpret the document according to their thinking but follow exactly what the document instructed.

The priest also received three calls in one day from officials from three different departments, warning him to stop offering free English and music classes for children.

Church sources said that it is unclear yet if the ban is a strictly enforced policy across China as some other places held summer camps undisturbed, although they agreed that the situation does not look optimistic.