Countries in the region must work together on common challenges from the Covid-19 pandemic to trade, says Chinese president Chinese President Xi Jinping walks past a military honor guard during a diplomatic visit by Saudi Arabia outside the Great Hall of the People in Beijing in June 2019. (Photo: AFP)

Chinese President Xi Jinping today warned against a return to Cold War-era divisions in the Asia-Pacific as tensions mounted over the security of Taiwan.

In the run-up to an anticipated virtual summit with US President Joe Biden as early as next week, Xi said countries in the region must work together on common challenges from the Covid-19 pandemic to trade.

"Attempts to draw ideological lines or form small circles on geopolitical grounds are bound to fail," he told a virtual business conference on the sidelines of the Asia-Pacific Economic Cooperation summit hosted by New Zealand.

"The Asia-Pacific region cannot and should not relapse into the confrontation and division of the Cold War era."

Xi's call came hours after China and the United States announced a surprise pact to accelerate climate action at a summit in Glasgow where countries are trying to agree on measures to curb the warming of the Earth.

The Chinese leader did not mention the US deal directly but said "all of us can embark on a path of green, low-carbon sustainable development".

Beijing has ramped up military activities near Taiwan, a self-ruling democracy claimed by China

"Together, we can usher in a future of green development," he said.

The Chinese and US leaders will hold virtual talks "soon", according to US Secretary of State Antony Blinken.

Reports say the meeting will take place as soon as next week.

But while the Biden administration has identified climate as a key area for potential cooperation with China, tensions have soared over their rival security strategies in the Asia-Pacific region, notably Taiwan. 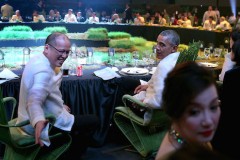 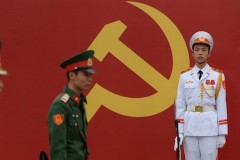 Religious leaders kept at home during APEC summit in Vietnam

Beijing has ramped up military activities near Taiwan, a self-ruling democracy claimed by China, with a record number of planes intruding into the island's air defence identification zone in early October.

"We will make sure that Taiwan has the means to defend itself because the purpose here is never to get to that point where anyone is actually trying to disrupt the status quo by force," he told an event hosted by The New York Times.

But in a message delivered to a gala dinner in New York on Tuesday by Beijing's ambassador to the United States, China's leader offered a conciliatory message.

"Right now, China-US relations are at a critical historical juncture. Both countries will gain from cooperation and lose from confrontation," Xi said, according to an embassy statement.

China was ready to work with the United States to improve regional and global cooperation and "properly manage differences," he said.

Besides its position on Taiwan, China also claims almost all of the resource-rich South China Sea, through which trillions of dollars in shipping trade pass annually, rejecting competing claims from Brunei, Malaysia, the Philippines, Taiwan, and Vietnam.

Against that backdrop, the United States, Britain and Australia announced in September that they had formed a new alliance -- AUKUS -- under which Australia will acquire nuclear-powered submarines using US technology.

Although delivery is years away and China was not specifically named, the announcement angered Beijing and separately sparked a furious row with France which saw its deal to sell Australia conventional submarines torn up.

In his address to Asia-Pacific business leaders, Xi also called for a joint effort across the region to close the "immunisation gap", making Covid-19 vaccines more accessible to developing nations.

"We should translate consensus that vaccines are a global public good into concrete actions to ensure their fair and equitable distribution," he told the summit.

The Chinese leader said countries should step up cooperation in research, production, testing, and mutual recognition of vaccines, "to emerge from the shadow of the pandemic and achieve steady economic recovery at an early date".

EWIAK RYSZARD
For now we can sleep in peace. Since 1945 (Operation Unthinkable) Heaven is holding back the wind of the WW3. And so it will be until the appointed time. In the Book of Daniel, we read, "And both these kings [Great Britain and Russia], their hearts (will be) to do mischief, and at one table (they) will speak a lie; but it will not succeed. Indeed yet (the) completion to (the) appointed time. And [the king of the north] will go back (to) his land with great wealth [1945]; and his heart (will be) against the holy covenant [Soviet Union introduced state atheism and believers were repressed]; and will act [it means a lot of activity in the international arena]; and go back to his own land [1991-1993. The collapse of the Soviet Union and the Warsaw Pact. The troops from the Soviet military bases returned to their country]. At the appointed time (he) will return back [it also means the break-up of the EU and NATO. Many countries of the former Eastern block will return to a military alliance
Reply