From Trump to an ailing economy, the Chinese president will need to navigate through many unknowns 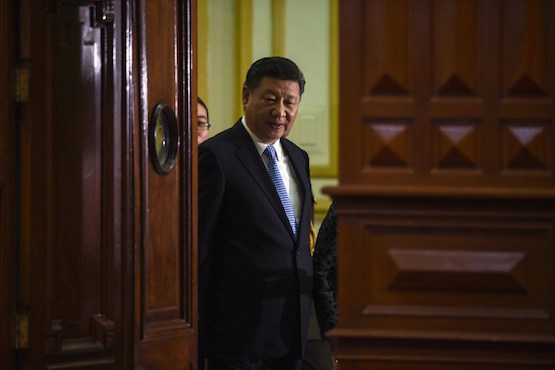 China's President Xi Jinping arrives at Peru's congress for a ceremony in Lima on Nov. 21, 2016 during an official visit ensuing the APEC Summit. (Photo by AFP)

On the surface, at least, it's been a good year for Chinese leader Xi Jinping on his terms.

He has continued to consolidate power with his ongoing anti-corruption campaign, has taken out a few more high profile internal critics and his authority has been extended over the People's Liberation Army.

But under the surface, problems continue to mount, particularly with an economy whose growth remains reliant on housing and infrastructure and the continuing emergence of the country's most fundamental underlying problem — environmental restriction and pollution — proving to be stubbornly un-moveable and likely irreversible in the medium term.

Most recently, the unexpected election of Donald Trump has also thrown up a challenge that that Xi would, in an ideal world, rather not have had to deal with in the run up to the 19th Chinese Communist Party Congress next October or November.

That is when the ruling CCP confirms its new Central Committee, Politburo and the elite seven person Politburo Standing Committee (PBSC) that will steer the country through the next five years.

It is pretty much a given that Party Secretary Xi, who is also Chairman of the Central Military Commission that controls the People's Liberation Army that covers ground, sea and air forces as well as holding the titular role of President, will gain a second five-year term in 2017. But apart from Premier Li Keqiang, the other five members of the PBSC would normally retire having reached the undocumented but seemingly agreed upon retirement age of 67.

However, this was recently pooh-poohed by a senior Party figure, a comment many see as leaving the way clear for Xi's chief lieutenant Wang Qishan, the man who has been in charge of the four year anti-corruption campaign — which has doubled as a power consolidation exercise — to stay on.

So far, unfounded rumors have even suggested the former banker may replace Li running the economy. More profoundly, there are now suggestions that Xi will cut the PBSB to just five people, from its present number of seven, a difficult maneuver that would leave precious little space for critics, especially if Wang stays.

Xi has won, and won big in the South China Sea (SCS) where his "salami strategy" had succeeded, probably beyond the CCP's wildest dreams. This strategy is by incrementally taking action, each one, in and of itself is too small to object to and — hey presto — the SCS is dotted with military installations, according to the latest satellite evidence.

There is little doubt that China is fast emerging as the world's number two-military power, notwithstanding Russia's superior nuclear arsenal.

Things have fallen China's way, too across Southeast Asia. Until recently the only resistance to towards a united position against Beijing on the South China Sea was from Cambodia and Laos. More recently China has garnered more support from the Philippines under its own Trumpian strongman Rodrigo Duterte, the military junta in Thailand — and the region's emerging basket case, Malaysia also has its hand out, too.

Yet, like Russia before it, domestic economic woes could threaten even this stronger emerging military and international position.

With serial credit splurges, the nominal top line of the Chinese economy — government issued gross domestic product figures (which many economists argue are not the best proxy for real growth) has continued to tick along but again, scratch the surface and the ever swelling Chinese debt pile is far to big too ignore and threatens to bring the economy down with a thumping hard landing. But predictions of this have been around for some time and Xi's ability to kick the can down the road on the economy could still be considerable.

Still, as the estimable former U.S. Defense Secretary Donald Rumsfeld would put it, there are two known unknowns and they are the extent of opposition or pushback against Xi — and his style or program — that remains within the Party.

Others see his continued pogrom against his enemies both inside and outside the Party — repression and censorship are now at levels not seen in many years — as a sign of weakness, rather than strength, but it is true enough that in one party states, only the paranoid survive or at least thrive.

There also remains division about whether Xi, like his father Xi Zongxun who founded China's modern technological and business hub Shenzhen for Deng Xiaoping, is truly an economic reformer presently hiding his light under a very thick bushel.

The other known unknown is U.S. President-elect Donald Trump and this is a major curveball for Xi, coming precisely at a time when he is trying to lock things down to sail steadily into the 19th Congress at the end of next year.

But Trump and his nominee for Secretary of State, Rex Tillerson, who has stepped down as chief of oil giant ExxonMobil, have closer ties and admiration for Russia and its authoritarian leader Vladimir Putin. Suddenly, a situation emerges where China could be encircled by a loose alliance between the U.S., Japan, South Korea, Russia and India. That only raises the stakes for Xi, who has already set the uncontrollable dogs of nationalism loose in recent years via the Party's propaganda department. Anti-Japanese and anti-Western feelings have been encouraged.

And now Trump has brought Taiwan into play with his recent phone call to President Tsai-ing wen, the first between leaders of each country. He has signaled that the One China policy — which states that only the mainland is China, not Taiwan, could be up for grabs. Taiwan is at once thrilled and terrified, the latter because Xi's retribution is likely to be aimed squarely at Taipei. Then there is the threat of what will be a mutually deleterious trade war by Trump — and all of this before he even takes office. All this sudden pressure on China, while overdue quid pro quo, nonetheless raises the chance of a miscalculation, perhaps at sea.

Already China is prodding at the U.S. at this delicate time when it is shifting administrations, testing the waters, as it were with its capture of an underwater drone not far from the Philippines this week. Internally, he faces the 19th Congress as his test.

It's hard to see how any of this ends well. Fasten your seat belts for a bumpy 2017.