A medical staff member wearing protective clothing organizes the transfer of patients in Wuhan in China's Hubei province on Jan. 26. China on Jan. 27 extended its biggest national holiday to buy time in the fight against the coronavirus as the death toll increased to 81 despite unprecedented quarantine measures and travel lockdowns. (Photo: AFP)

China’s respiratory virus emergency has quickly escalated into a full blown and so far uncontrolled human tragedy, with scores of people already dead and more than 100,000 people likely to have been affected.

It is increasingly clear that much of the blame for the seriousness of the coronavirus’s spread can be placed on the culture of lying and covering up bred by China’s deeply flawed and highly corrupted Marxist-Leninist system “with Chinese characteristics.”

Yet it’s also worth reflecting on the limited tools that the Chinese government has to deal with the situation due to its parallel wars on both religion and civil society. The two are closely related as across the world the Catholic Church, Protestant denominations, Islam, Buddhism, Hinduism, Judaism and most other organized religions play an outsized role in civil society through religion-backed organizations and charities devoted to humanitarian services.

The Catholic Church has traditionally been very active in providing such services through church-backed organizations such as Caritas and the Society of St. Vincent de Paul as well as a wide range of religious orders.

Several cities around the central Chinese riverport city of Wuhan with a combined population of about 40 million people are now the subject of history’s biggest quarantine attempt.

Authorities are also moving to block long-distance buses (for now, but more measures are surely coming) by authorities in Beijing as well as the nearby province of Shandong.

It is precisely in times of dire emergency such as this that civil society organizations — best summed up as non-government organizations (NGOs) and religion-based charities — come into their own. There are Catholic NGOs inside China but the space where they can operate is being rapidly squeezed and major organizations have found it too tough to make it worth their while.

Under President Xi Jinping’s war on religion, started in 2015 and escalated in February 2018 to a raft of new rules and regulations restricting religious activities that continue to be expanded, Beijing has shown that it is determined to keep religion inside churches, mosque and temples and out of civic society. The latest religious regulations, due to come into effect on Feb. 1, make that delineation even clearer.

“I think these rules identify clearly that the government’s objects of attention are not the religions per se but their civil organizations. The rule is do not speak about ‘religion’ but of ‘religious groups,’” said Francesco Sisci, a researcher at Beijing’s Renmin University.

“This is in line with the 2007 party congress when Hu Jintao spoke of the positive role of ‘religious figures’ to build social harmony. That is, the party recognized that religions have two aspects: their religious beliefs and their civil life. The party intervenes in the civil life of religious organizations.” 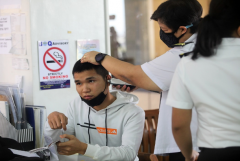 It’s not just religious organizations but all NGOs that Beijing has been at war with under Xi Jinping, who has been determined to centralize all authority in the Communist Party once more, reversing decades of gains for civil society under Deng Xiaoping, Jiang Zemin and Hu Jintao.

Indeed, Hu was all too eager to invite Caritas into China to help with the aftermath of the devastating Sichuan earthquake in April 2008 that saw more than 90,000 people die.

Catholic hospitals in Hong Kong and Caritas, which itself has a medical center and a hospital, have become part of the city’s human services infrastructure. Caritas is already doing some heavy lifting on the Wuhan virus in Hong Kong, but mainland China is missing out on this critical subsidiary infrastructure.

This is not just in terms of hard assets — China has shown the benefits of the party-state in its ability to construct new hospitals in a week — but also in soft infrastructure, knowledge and an international skills and experience base that organizations such as Caritas, Red Cross and Medicins Sans Frontieres can bring to these situations.

On the other side of the equation, the emergency has highlighted the value for China in being a participant in the world economy and associated institutions, particularly the World Health Organization and global medical research networks.

Too many times, it seems that Beijing has wanted to get what it can at no cost to improve its economic performance, stealing others’ intellectual property, gaining an unfair advantage for its economy by manipulating its currency, and generally pushing to get everything on its own terms without any dividend in mutual benefits.

China is not yet a fit and proper citizen of the international community, as many commentators have noted.

The current epidemic presents China with a mirror crisis in the field of human services. China is sharing information on the scale of the crisis because it is understandably terrified after its experience of the 2002-03 SARS epidemic. This is a small crack at least in the Chinese egg, although suspicions are mounting that Wuhan is covering up the real number of infections, with outside medical research teams estimating that real infection rates could be between 100,000 and 190,000.

The wider significance is that China must choose either to cover up and die alone or to share information better and trust in global networks.

On a more local, human scale, Beijing should also be closely observing Hong Kong and seeing the huge value of civil society and its incredibly worthwhile organizations as partners rather than threats.