Beijing has raged at the trip by Nancy Pelosi, the highest-ranking elected US official, to the island in decades 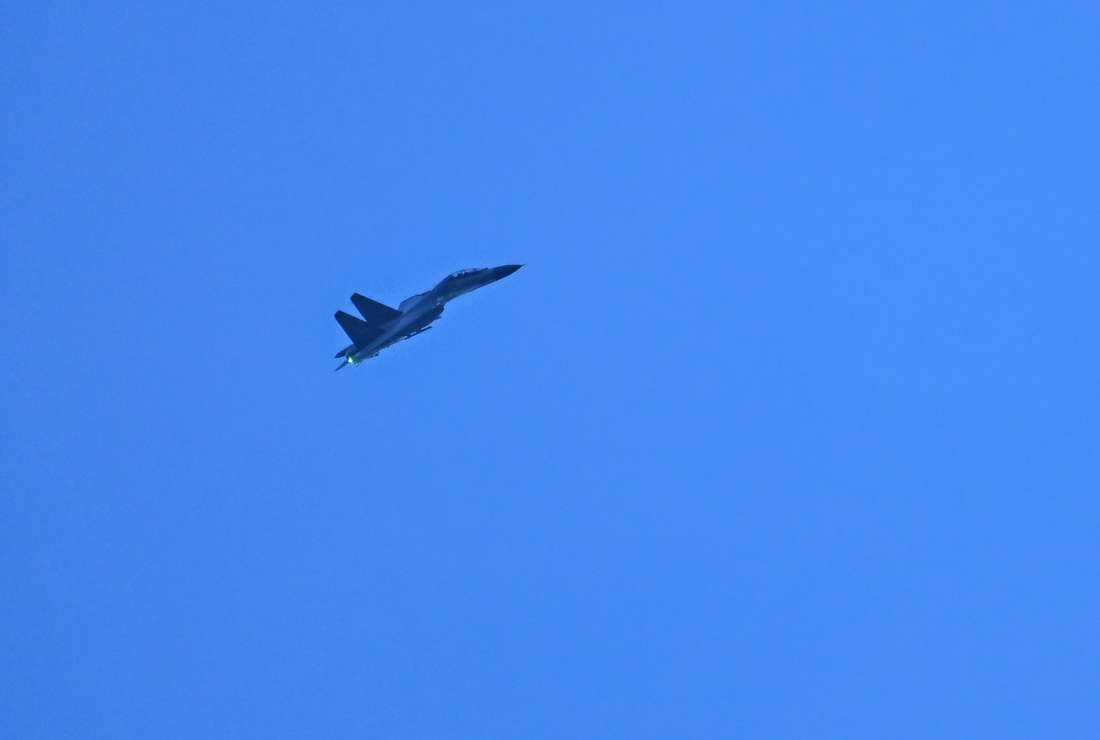 A Chinese military jet flies over Pingtan island, one of mainland China's closest points to Taiwan, in Fujian province on Aug. 6. (Photo: AFP)

China's largest-ever military exercises surrounding Taiwan were drawing to a close on Sunday following a controversial visit last week to the island by US House Speaker Nancy Pelosi.

Beijing has raged at the trip by Pelosi -- the highest-ranking elected US official to visit Taiwan in decades -- ripping up a series of talks and cooperation agreements with Washington, most notably on climate change and defense.

It has also deployed fighter jets, warships and ballistic missiles in what analysts have described as practice for a blockade and ultimate invasion of the self-ruled island -- which China claims as its territory.

Those exercises were supposed to end on Sunday, but neither Beijing nor Taipei confirmed their conclusion, though Taiwan's transport ministry said it had seen some evidence suggesting at least a partial drawdown.

Taipei's defense ministry confirmed China had dispatched "planes, vessels and drones... simulating attacks on Taiwan's main island and on ships in our waters".

It detected 66 air force planes and 14 warships operating in the Taiwan Strait, of which 22 crossed the median line and the extended area of the unofficial demarcation in the waters that separate Taiwan and China.

Beijing does not recognize that demarcation.

China's defense ministry did not respond to a request for comment about the expected conclusion of the drills. A Taiwan defense ministry official told reporters to "ask the country conducting them to explain".

Early Monday, the Chinese state news agency Xinhua issued a short report that did not mention the conclusion of the drills.

Taiwan's transport ministry said six of the seven "temporary danger zones" China had warned airlines to avoid ceased to be in effect as of noon on Sunday, signaling a partial drawdown of the drills.

"Relevant flights and sailings can gradually resume," the ministry said.

Taipei said some routes were still affected in the seventh area, and authorities would continue to monitor ship movements there.

Beijing has also announced fresh drills in the Yellow Sea -- located between China and the Korean peninsula -- to take place until August 15.

In response, Taiwan said it had mobilized a "joint intelligence surveillance and reconnaissance system to closely monitor the enemy situation" as well as sending planes and vessels.

"We call on the Chinese government not to go around wielding its military power, showing its muscles everywhere and jeopardizing the peace of the region," he told reporters Sunday.

Taipei's foreign ministry said the drills threatened "the region and even the world".

To show how close it has got to Taiwan's shores, the Chinese military released a video of an air force pilot filming the island's coastline and mountains from his cockpit.

The Eastern Command also shared a photo it said was of a warship on patrol with Taiwan's shoreline visible in the background.

Ballistic missiles were also fired over Taiwan's capital during the drills, according to Chinese state media.

Taiwan has remained defiant throughout China's saber-rattling, insisting it will not be cowed by its "evil neighbor".

But experts have warned the drills have revealed an increasingly emboldened Chinese military capable of carrying out a grueling blockade of the island as well as obstructing US forces from coming to its aid.

"In some areas, the PLA might even surpass US capabilities," Grant Newsham, a researcher at the Japan Forum for Strategic Studies and a former US Navy officer, told AFP, referring to China's military by its official name.

"If the battle is confined to the area right around Taiwan, today's Chinese navy is a dangerous opponent -- and if the Americans and Japanese do not intervene for some reason, things would be difficult for Taiwan."

The scale and intensity of China's drills -- as well as Beijing's withdrawal from key talks on climate and defense -- have triggered outrage in the United States and other democracies.

US Secretary of State Antony Blinken said Washington was "determined to act responsibly" to avoid a major global crisis.