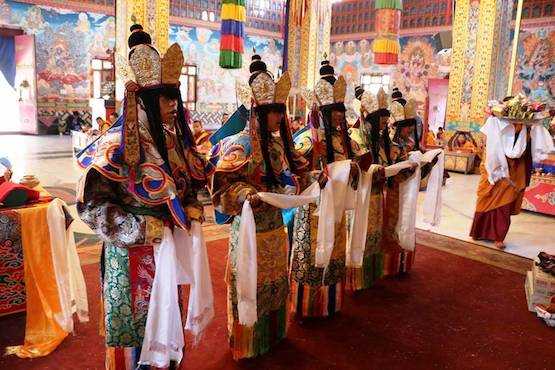 Fifty-eight years ago, a large Tibetan protest broke out in Lhasa March 10 to fight against the Chinese communist government. It eventually led to Tibet's political and spiritual leader Dalai Lama, some government officials and tens of thousands of Tibetans fleeing to neighboring India, Nepal, Bhutan and other countries.

On March 10 this year, exiled Tibetans around the world held various activities to mark the anniversary and called on the Chinese government to improve its policy on Tibet and to resolve the Tibet issue.

Under Chinese reign, basic human rights of the Tibetans have been trampled on. The serious destruction of Tibet's natural environment has further threatened their survival. From the perspective of China's policy on Tibet, or perhaps we may say, under the rule of President Xi Jinping, there is no hope for improvement in the short term. The future of Tibet is deeply concerning.

Due to China's strict control on freedom of speech and severe crackdown on information sources in Tibet, it has become increasingly difficult to obtain information from inside the area. Thus it makes people outside feel that Tibet is very peaceful, while the Chinese propaganda illustrates that "Tibet is in the best period of its history" to mislead and deceive the world. But the truth cannot be concealed forever.

The current situation in Tibet

The latest annual report released by Tibetan Center for Human Rights and Democracy described Tibet as a "Giant open prison." A report of the Freedom House said that the human rights situation in Tibet ranked between Syria and North Korea. In the "State of World's Human Rights" published by the Amnesty International, the situations in China (includes Tibet) and Syria are listed together as the two countries of greatest concern.

During the 34th meeting of the United Nations Human Rights Council, the high commissioner Zeid bin Ra'ad al-Hussein particularly expressed his concerns on the problems currently faced by Tibet. On the eve of the council meeting, six U.N. experts jointly issued a statement pointing to a series of human rights' violations in Tibet, in particular the situations of Larung Gar Buddhist Academy in Sertar County and Yarchen Gar Monastery.

The Chinese government not only violates the religious beliefs of those who follow the Dalai Lama and other foreign religious leaders, it also violates the rights of religious freedom of the numerous Tibetans who do not accept the so-called "additional Panchen" Gyaincain Norbu selected by the government to represent the Panchen Lama of Tibetan Buddhism. The government forces the believers to join his worship ceremony, hoping that they would recognize him. The local government also explicitly stipulates via regulation banning the propagation of Tibetan Buddhism in China.

Acting in accordance with the notice of "Rectification and Clean-up of Larung Gar Buddhist Academy in Sertar County," the prefecture government of Ganzi expelled 20,000 students who gathered at this largest Buddhist academy in the world. They came from mainland China, Hong Kong, Malaysia, Mongolia, Singapore, South Korea, Taiwan, Thailand, the United States and European countries, as well as all over Tibet.

The government also forcibly demolished the huts used by monks with only five students allowed to stay. It interfered with student enrollment and management of the academy. The same policy was enforced on Yarchen Gar Monastery where there were nearly 10,000 students.

The annual report of the Tibetan Centre for Human Rights and Democracy revealed that four Tibetans protested the Chinese government by self-immolation in 2016 and eight others took to the street to protest alone. It also reported that 36 Tibetans were known to have been arbitrarily arrested for political reasons, an average of three each month.

"With the extension of a mass surveillance program, freedom of opinion and expression are subjected to further restrictions forcing Tibetans to resort to unprecedented levels of self-censorship," the report said.

When Tibetans expressed their views peacefully and criticized the suppressive policy, they would be arrested arbitrarily on the accusation of "separatism" and "divulging state secrets." Many suffered from torture or forced disappearance. In order to monitor more effectively the Tibetans, stationary task forces of 22,000 officers were dispatched to over 5,400 villages, neighborhood committees and all monasteries in the Tibet Autonomous Region in 2016 alone.

The government also arrested Tibetans who posted things on social media Wechat that went against its policies. More than 10 people received prison terms from one to 13 years. The Chinese authorities legal definitions on what is a "state secret" or other jargon-like words remains too board and vague. Despite this the Chinese authorities systematically use them to crackdown on opposing views and even peaceful expression or information sharing on Tibetan issues.

The Chinese government tramples and violates other civil rights and political rights of Tibetans. It has an unjust criminal system and abuses are rife. The state uses arbitrary arrests, detention and torture. The Tibetan people in their own land are deprived the right of peaceful assembly and freedom of movement. They suffer discriminatory travel and migration restrictions and so on.

These two aspects are interrelated. To improve the policy on Tibet by granting Tibetans more freedom would help solve the Tibet issue and remove tensions.

However, under current Xi's administration, there are no signs of improvement in either of these two aspects.

The reasons are, firstly, the collective dictatorship of the Communist Party has decided to "normalize" its violation of human rights. Thus, improvement of human rights in Tibet is out of question. Second, the government's established policy on Tibet is to destroy its culture and ultimately eliminate the race.

The Chinese government is in fact adopting a "delay strategy" to the Tibet issue. They await the death of the Dalai Lama, believing that without him the problems would naturally disappear. Thus, the Chinese government will only continue its hard-line policy in Tibet, which will lead to various forms of resistance from the Tibetans. In return, China would use a variety of groundless charges to justify any crackdown by force, further stimulating more protests against it.