China's stance on casinos on Taiwan islands drove 'no' vote

Beijing's opposition was a turning point in how people on Kinmen islands voted during casino referendum, says priest 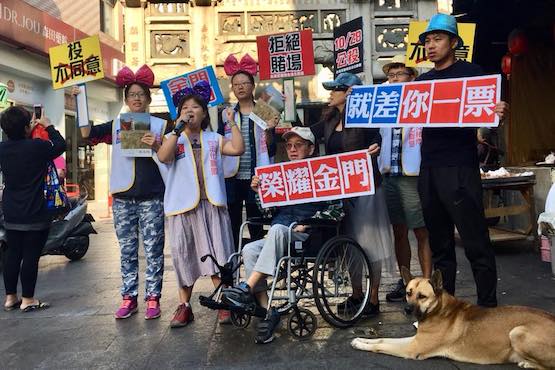 Supporters of the Taiwan Anti-legalization of Gambling Coalition make their voices heard in the lead up to a referendum that rejected the construction of casinos on Kinmen islands. (Image supplied)

A priest has linked Chinese President Xi Jinping's ongoing anti-corruption campaign in mainland China to the successful "no" vote that has blocked casinos from being built on Taiwan's Kinmen islands.

Residents on the islands overwhelmingly voted against having casinos on their territory on Oct. 28 with reports saying 24,368 people voted "no," while 2,705 voted "yes."

Father Chou Jung of the Kinmen Sacred Heart Church told ucanews.com that he was worried about the referendum's outcome before it was held. But the priest believed the turning point was the Chinese government's opposition to the casinos and its subsequent threat to end the "Mini Three Links" policy between the mainland and Kinmen.

Established in 2001, the Mini Three Links opened postal, transportation and trade links between Fujian and Kinmen which are only two kilometers apart.

"The support for opening the casinos in Kinmen was for stimulating the economy but the big boost for the Kinmen economy has been the Mini Three Links," said Father Chou. "When China is against the proposal and said it would to shut down the links, how could the islanders support it?" he asked.

Ho Tsung-hsu, executive director of the Taiwan Anti-legalization of Gambling Coalition, also gave weight to the idea of the Chinese government's role in blocking the bid. Ho said that China wants to prevent mainland officials' money laundering by gambling.

"President Xi is now fighting corruption and Kinmen is so near Xiamen," said Ho. "If there is a casino, China would fear it would become a place of money laundering," he said.

China watchers say that Xi has used his so-called anti-corruption campaign to consolidate power within the Chinese Communist Party.

Father Chou said if casinos were ever allowed on Kinmen it would bring with them corrupting elements. "Gambling is an act of greediness," he said. "People go bankrupt and ruin their lives through it," he said. "Moreover, prostitution and other evils would follow."

As part of his opposition, Father Chou led an anti-casino protest march of 300 people consisting of church and community members a week before the referendum was held. Island off Taiwan to vote on controversial casino plan