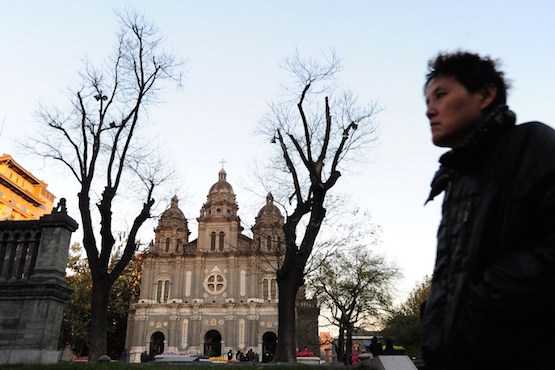 A file image of a man walks past the historic St. Joseph's Catholic Cathedral on Wangfujing in Beijing. At the heart of the Vatican's dilemma with China is that the country is ruled by a political entity that has a shocking record on religious freedom and human rights. (Photo by AFP)

The disappearance at government bidding of Chinese Bishop Peter Shao Zumin from his diocese of Wenzhou after the death of his predecessor Bishop Vincent Zhu Weifang so he could not preside at his predecessor's funeral would have sent the warnings bells ringing in the office of Vatican Secretary of State Cardinal Petro Parolin.

The key issue is that Bishop Shao — who as coadjutor bishop with automatic succession to Bishop Zhu on his death — has been ordained with the approval of the Holy See. But neither the bishops' conference in China nor the Chinese Catholic Patriotic Association recognizes him as a bishop. He doesn't have Chinese government approval.

This move comes, of course, during the intensifying negotiations between the Holy See and China's ruling Communist Party about some sort of deal that will see a rapprochement between the two sides for the first time since the party won the civil war against its Nationalist foes, or Kuomintang, in 1949.

While no one has explicitly laid out the detail of what is being discussed, it is widely thought — via various sources — that the main game focused on a deal that will see the Vatican finally gain approval over the appointment of all bishops and priests, in some way harmonizing the "official" and "underground" communities of China's estimated 12 million Catholics.

The question of "will they or won't they?" has led to a guessing competition among Vatican and Beijing watchers. While that issue has become the focus of attention, there is a much larger game at play here.

It is increasingly obvious to those that understand China, that a deal with the Vatican — a breakthrough in the world's most populated country with one of the world's largest religions — is part of an overarching, multi-faceted program of soft power projection by the Communist Party.

The soft power program operates at a number of levels. The Chinese government view is promoted in the media. China's involvement in local Chinese and English language publications in different parts of the world (sometimes Chinese government owned) is its way to get its view promoted as an independent view when it is really propaganda.

A further level of government activity is focused on universities, in its "gifts" to academic institutions including its internationally extensive network of Confucius Institutes.

And then there are the usual ways to power — political donations all paid by the Party, sometime using private fronts. All are designed to convey a kinder, softer China to cover up the reality.

In fact, these Vatican-Beijing talks are the latest chapter in a soft power play by the Catholic Church itself. There is nothing new in what the Vatican is doing: asking for the relationship with China it had before 1949 and now has with most other nations in the world, including China's Communist confreres in Vietnam and Cuba. And the relationship with China has been a constant focus for four hundred years since the Jesuit Father Matteo Ricci arrived in Beijing in 1601.

Pope Francis himself, as a Jesuit, is widely seen as the catalyst behind the latest push for a deal with China. Such moves have been made in the past but have always fallen short.

This time around, it has been a very public push. China's prominence in international affairs has only grown since the 2007-2008 global financial crisis. That ascendancy,  on attaining Party leadership in 2012 — shortly after his own election. It was followed by a series of talks that have been reported in the media — often first in ucanews.com.

All of this has made the stakes for the Vatican, and its reputation, much higher.

At the very heart of the Vatican's dilemma is that China is a country with an appalling human rights record and more specifically a country with a shocking record on religious freedom.

"The People's Republic of China's constitution states citizens have 'freedom of religious belief' but limits protections for religious practice to 'normal religious activities' and does not define 'normal,'" noted the International Religious Freedom Report for 2015, issued by the U.S. State Department.

"In practice, the government exercised state control over religion and restricted the activities and personal freedom of religious adherents when these were perceived to threaten state or Chinese Communist Party (CCP) interests, according to non-governmental organization and international media reports."

Under its legal system, China executes more of its citizens than any other nation on earth. And that legal system is not one that is in tune with international best practice by any stretch.

Dr. Liu Peng chief of the Pu Shi Institute for Social Science in Beijing set up in 1999 as the first Think-Tank in China on Religion and the Rule of Law last week pointed out at a conference in Belgium that China is in urgent need of a Law on Religion.

"Since religion is not considered as a positive element in the socialist country, it is hard for it to play a positive role in the public square," he said.

Peng stressed the need to develop in China a basic Law on Religion and to reform the current administrative management system on religion switching its power to the rule of law on religion.

And it's the extra-judicial practices in China — including detention, house arrest — such as that now being experienced by Shanghai's bishop that do not sit well with most Catholics in China and indeed elsewhere in the world.

In doing a deal with Beijing, the Vatican would automatically expose itself to accusations of being complicit with such practices.

The CCP's soft power program — which is the context for assessing the current discussions with the Vatican — is designed to ameliorate its more obvious "hard" power programs and has been underway for some years.

There is also another, largely unexplored twist, in what happens with Taiwan — the effectively independent nation that China still considers to be part of its territory but just an errant province.

The Holy See has diplomatic relations with Taipei, one of only a dozen of so sovereign nations in the world that have not been bullied by Beijing into recognizing the "one China" policy.

As the world is now seeing, China's power projects can be far more successful than what they should be. Its invasion, control and effective colonization of Tibet has been brutal but is complete.

With China's move to colonize large swathes of the South China Sea, the world has become increasingly aware of what it is doing: building islands in the sea to aid its rapid militarization of the region — despite express promise that it would not do so.

Cardinal Parolin is nobody's fool. But he should see the parallel here: a deal with the Vatican — a huge win for Beijing's soft power program — could quickly morph into something that the Holy See had in no way intended.