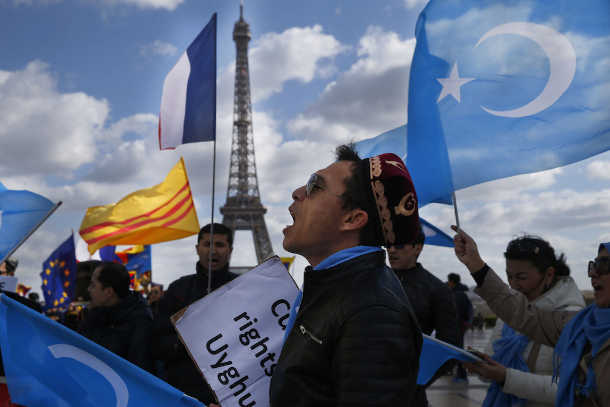 Protesters from France's Uyghur community shout slogans and hold flags of East Turkestan during a demonstration over China's human rights record near the Eiffel Tower in Paris on March 25 during a state visit by the Chinese president. (Photo by AFP)

The scale of China's extraterritorial persecution of people it considers to be Chinese nationals, including its Muslim and other ethnic minority citizens, is immense.

Stories abound of Uyghur university students being called back to China in the middle of their semesters abroad in Egypt and of Kazakhs being extradited or detained when they cross the border from Kazakhstan into China. Chinese activists and those facing allegations of corruption have been reportedly abducted from Thailand, Vietnam and Myanmar. But nowhere is safe, including the U.S., U.K., Canada, Australia or New Zealand.

I interviewed a Uyghur academic who has lived for years abroad and is afraid to publish an academic article on the situation in Xinjiang that has already been accepted by a peer-reviewed journal. He fears that publishing the article could lead to persecution of his family in China. The Chinese Communist Party (CCP) has created a general feeling of fear in the Chinese diaspora that has impeded their freedom of speech and therefore their ability to defend loved ones at home and to advance their careers and lives abroad.

On March 30, new details of Chinese government attempts to obtain personal information from Uyghurs living in Australia were revealed. ABC obtained text messages that appeared to originate from Chinese authorities that asked Uyghurs for their workplace addresses, passports, drivers’ licenses and recent photos. Uyghurs that ABC interviewed provided the information to Chinese authorities for fear that their relatives in China would face consequences.

Family members in China, likely under duress from authorities, are also asking their relatives who are outside China to return and face police questioning. In at least one case, an Australian citizen of Uyghur ethnicity, who claims not to be a citizen of China, was contacted by Chinese authorities and told that he must hand over all information on not only himself but also his wife and children in Australia.

One Uyghur woman who has not heard from her family in China since 2017 received a chilling call from a friend there who said two siblings and an in-law were placed in a detention camp that year because she is in Australia. She is not the only Australian burdened with such circumstances and the unjust feelings of guilt that they create. There are about 3,000 Uyghurs in Australia.

Were such extraterritorial actions by the CCP limited to Australia, they might be seen as incredible or even unbelievable. But they are part of a pattern seen elsewhere, including in Pakistan and the United States.

At least 200 Chinese wives of Pakistani men have disappeared after they crossed the border to visit China. Their accompanying children have often disappeared as well. Some of the children are left to fend for themselves in China after their mother is detained, and without access to their father still in Pakistan.

The latest news on Pakistan comes from mountainous Gilgit-Baltistan in the northeast of the country on the border with China. On March 1, the legislative assembly there unanimously called on the federal government to take urgent steps to free 50 detained Chinese wives of men from the region. The federal government, which is dependent on China for loans, infrastructure development and military hardware, has sought to deny news of lost wives in China.

The wives typically must travel across the border for their import-export businesses and so are forced to risk detention or forego income that could mean the difference between food for the family or hunger. According to a lawmaker from the region, the women were arrested on suspicion of terrorism, but none had actually been found to have such involvement.

Arrests of these women started last year even though their marriages were in accordance with laws from both countries. In 2018, the Gilgit-Baltistan all-party conference passed a similar resolution, but with the additional call for a one-year trade ban against China.

The Deccan Chronicle in Pakistan reported on the resolution and claimed that the “region is home to large China-Pakistan Economic Corridor (CPEC) infrastructural work being mainly undertaken by the Chinese government, and as a result the Chinese Communist Party has seen itself fit to overtake functions of justice and rule of law in the territory.” This follows a pattern of CCP attempts to extend its law into regions it militarily occupies, such as Tibet, Xinjiang and, most recently, the South China Sea.

A report in 2018 detailed how family members of Uyghur immigrants in the United States have also been called by their family members, who ask for ID scans, car license plate numbers, bank card numbers, employment contracts, letters from supervisors and phone numbers. The goal of such data is supposedly to allow Chinese authorities to issue Uyghur expatriates with Chinese national ID cards. Such ID cards could then be used by Chinese authorities to impose even great extraterritorial legal obligations on their Uyghur “citizens” abroad.

The threat to obtain the data from resistant expatriate Uyghurs in the U.S. is that family members will be penalized if the demands are not followed. The new ID card is reportedly meant for all Chinese living abroad.

China also imposes its extraterritorial penalties on Chinese human rights, democracy and Falun Gong activists. Such penalties can be quite personal and ugly, often becoming coordinated character assassination. The New York Times reported on April 1 that Chinese democracy and human rights activist Sheng Xue in Canada has suffered from numerous online attacks on her reputation by anonymous blogs and fake Twitter accounts. Obviously fake photos of the married Sheng show her naked or kissing other activists who are not her husband. A human rights lawyer who sought to help Sheng had his computer hacked and his research deleted. The report he planned to write was never published.

Chinese security services have reportedly kidnapped numerous people they consider to be Chinese nationals but who are in some cases legally nationals of other countries. This includes persons in Thailand, Myanmar, Vietnam, Canada, Australia, New Zealand, Vanuatu, Fiji and Hong Kong.

Six Chinese nationals disappeared in the U.S. in 2013, according to a former intelligence official. Evidence suggested that Chinese intelligence officials were threatening American residents near their homes or schools. In three cases, including that of a Chinese graduate at UC Berkeley, evidence emerged that the victim was taken against his will.

Allegations used to justify abductions include corruption, selling of banned books, owing billions of dollars to state-owned banks in Beijing, and publicly voicing dissident thoughts against the CCP or in favor of democracy and human rights.

In the renditions, known as shuanggui in Chinese, victims are often drugged, transported by cargo ship, tortured and forced to make confessions. Some have been jailed for life, and at least one, Peng Ming, died in a Chinese prison under suspicious circumstances. The abductions stretch back to 2000, and China claims to have repatriated over 3,000 Chinese since 2012. Victims and their families generally keep quiet for fear of causing themselves and their detained family members yet more persecution.

Australian authorities have told Uyghurs to call the police if they are concerned about their personal safety. But this is indicative of the woefully inadequate response in all the countries. All have lucrative commercial relations that they want to maintain, and some deny that threats against family members back in China to force a rendition do not constitute a real kidnapping. These are all self-serving excuses to look the other way as human rights violations occur in one’s own country.

In cases of CCP foreign abduction or extraterritorial law enforcement, the ambassador from China should be publicly summoned as a first step to explain each and every case. If no good explanation is offered, government action against China should be taken. Chinese embassy personnel, who have diplomatic immunity and so are the most likely enforcers, should be sent home as a second step. If these measures are ignored, a third step of economic sanctions should be imposed.

A failure to take serious action against Chinese imposition of its racist and extraterritorial laws internationally is a dereliction of duty and a violation of any constitution that upholds the principle of equality before the law.