Cause of blaze remains unknown as church crackdown continues 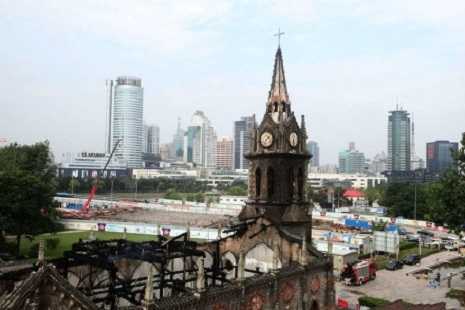 A fire destroyed one of China’s oldest cathedrals in the eastern sea port of Ningbo in the early hours of the morning as an investigation looked into the cause on Monday.

More than 50 firefighters spent two hours putting out the fire which gutted the interior and the roof of 142-year-old Jiangbei Sacred Heart Church leaving only the walls intact. Nobody was injured.

“When they opened the door to inspect they discovered that the church was on fire and reported it to the police immediately,” he added.

The bell tower and outbuildings that make up the five sq.km compound of the Gothic-style cathedral were not damaged.

A staff member staying in the church overnight said the fire started at the altar but the reason was not known as an investigation was launched on Monday, according to state news agency Xinhua.

The Church in Ningbo has recently suffered a widespread crackdown by authorities in the southeastern Zhejiang province with at least two churches in the city ordered to take down their crosses. In mid-April, a government notice threatened to demolish one-year-old Xiaying Church in Ningbo if it did not remove its cross within a month.

The old cathedral is considered a much less likely target of the government campaign against Christianity in Zhejiang – which has so far affected at least 200 churches – because of its long history and links to the Communist Party.

Built in 1872 by French missionaries, the cathedral was later used as a Party revolutionary base and has since been declared a national monument, affording it state-level protection. The cathedral was previously damaged during the Cultural Revolution when it was used as a storage facility, and was then returned to the Catholic community in 1980.

Father Jin said that there were plans to arrange masses in other churches in Ningbo following Sunday night’s devastating fire.

“We have told the laypeople not to come over but to pray at home,” he added.