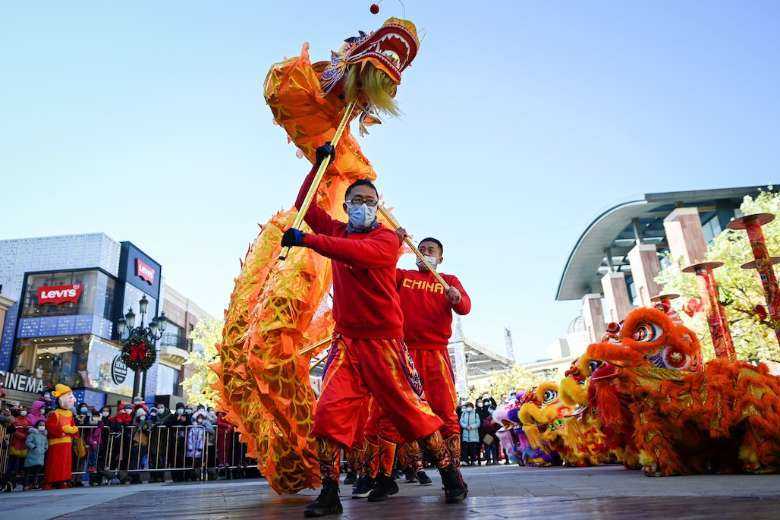 A dragon dance team performs outside a shopping mall in Beijing on Feb. 16 on the fifth day of the Lunar New Year that ushered in the Year of the Ox. (Photo: Wang Zho/AFP)

The communist government in China has promulgated a new set of rules for religious clergy to be implemented in two months, but they ignore the Sino-Vatican agreement on bishop appointments by asking people to elect their bishops democratically.

The new Administrative Measures for Religious Clergy, set to come into effect from May 1, cover priests of all five authorized religions in China — Buddhism, Taoism, Catholicism, Protestantism and Islam.

The new measures, adapted from the 2018 Regulation on Religious Affairs, were promulgated on Jan. 8 as State Administration of Religious Affairs Order No. 15. An English translation of the original text in Chinese appears on bitterwinter.org, a website on religious liberty.

“Catholic bishops are approved and consecrated by the Bishops' Conference of the Catholic Church in China (BCCCC),” says article XVI of the order, which refuses to mention the 2018 Sino-Vatican agreement on bishop appointments, which was renewed for another two-year term in 2020.

The BCCCC, which is not recognized by the Holy See, and the Chinese Catholic Patriotic Association (CCPA), which directly works under the Chinese administration overseeing the state-approved Catholic Church, are given responsibility for reporting the election of bishops.

Within 20 days of the consecration of a bishop, the BCCCC and CCPA should report it to the State Administration of Religious Affairs, stipulates article XVI.

One of the documents to be submitted to the State Administration of Religious Affairs for the record of electing the bishop is “a statement issued by the Catholic community … on the democratic election of the bishop.”

The Catholic community electing a bishop could be of a province, autonomous region or municipality functioning directly under the central government, the article says.

The new regulations indirectly assert that the election of Catholic bishops will be done by the state-approved system under the Chinese Communist Party’s direction and the Vatican and Pope Francis will have no role in it.

It runs contrary to the laborious China-Vatican deal on appointment of Catholic bishops, signed in September 2018 after several years of negotiations. The still undisclosed deal aims to appoint bishops with the agreement of China and the Vatican.

But the new regulations aim to smother the underground church by criminalizing the existence of clergy outside the state-approved database of the clergy.

“Religious clergy should love the motherland, support the leadership of the Chinese Communist Party, support the socialist system, abide by the constitution, laws, regulations and rules, and practice the core values of socialism,” says article III of the regulations.

Hundreds of underground Catholic clergy have refused to register with the state-approved database because they are unwilling to obey atheistic dictates in the services of the Church.

However, under the new regulations, clergy who are not registered with the state could be arrested and jailed if they perform any clerical office, Catholic insiders say.

A church observer said the new regulations are a legal tool to intensify the crackdown on underground clergy and annihilate the underground church.

Mainland Catholic leaders have been skeptical about the Sino-Vatican deal ever since it was signed, pointing to Beijing’s lack of respect for international deals and conventions in pushing communist ideology in China.