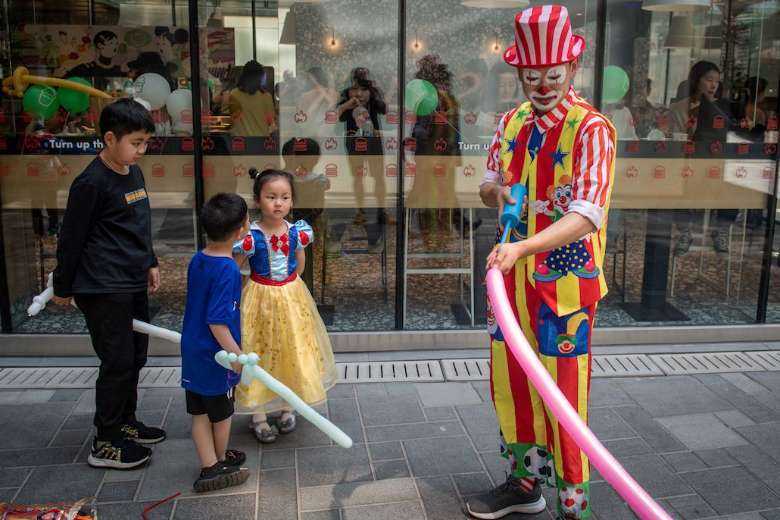 A clown makes balloon-shaped animals outside a shopping mall on International Children's Day in Beijing on June 1, a day after China announced it would allow couples to have three children. (Photo: AFP)

The communist regime of China, the world’s most populous country of 1.4 billion people, announced on May 31 that it will allow married couples to have up to three children.

The decision came from the Politburo, the highest policy-making body of the Chinese Communist Party (CCP), chaired by President Xi Jinping. It signals a major shift in demographic policy of a country where everything from life to death is strictly controlled by the state.

The state-run Xinhua News Agency reported that the government seeks “to ensure continued economic growth, national security and social stability” with the policy.

However, the main driving force behind the change is a worrying decline in the birth rate that poses serious threats to China’s economy from an aging population.

China now has a below-replacement-level fertility rate of 1.3 children per woman, way down from the replacement level of 2.1. China is on a par with aging societies in Japan and Italy.

In normal circumstances, a country attempting to have more babies is not big news. Yet China’s new child policy made headlines across the globe. That’s because China is no normal country but a totalitarian state obsessed with an extreme form of Marxist-Leninist ideology that denies or limits its citizens all basic freedoms and rights including reproduction rights.

For decades since 1980, the communist regime has pursued a controversial one-child policy with an aim to curb what the state perceived as an excessive population boom. The policy was strictly enforced in a grossly inhuman manner with hefty fines, pregnancy checks, forced sterilizations and forced abortions, triggering blowbacks from rights watchdogs and the international community.

The Catholic Church has strongly criticized such repressive measures to curb procreation and population. The Church’s stance is based on a popular 1967 encyclical, Populorum Progressio (On the Development of Peoples), by Pope Paul VI, who spoke out against “drastic remedies to reduce the birth rate.”

“There is no doubt that public authorities can intervene in this matter, within the bounds of their competence. They can instruct citizens on this subject and adopt appropriate measures, so long as these are in conformity with the dictates of the moral law and the rightful freedom of married couples is preserved completely intact,” the pope wrote.

“When the inalienable right of marriage and of procreation is taken away, so is human dignity.”

The one-child policy created a huge gender imbalance and caused millions of female infanticides in China due to a preference for male babies among many couples, mostly in rural areas. Many couples believe sons can provide support and security to aging parents.

Moreover, the one-child policy has been blamed for a rise in the trafficking of girls and women from various parts of Asia into China in the guise of marriage. Many trafficked women never became brides but ended up as sex slaves in bars, brothels and houses.

A delayed realization about the backfiring policy creating a low birth rate and gender imbalance prompted the authorities to introduce a two-child policy in 2016. But it was already too late and yielded no significant fruits, as the latest population data shows.

Like almost all the CCP’s flawed and repressive social, economic, political and religious policies, its policy of demographic control by force has failed to deliver and massive cracks have appeared.

China is now promising to provide couples with incentives for having more babies, such as lowering education costs, raising tax and housing support, protecting the legal rights of working women and clamping down on extremely high dowries prevalent in many parts of China. The authorities also plan to educate young people on marriage and love.

However, there are serious concerns that the new policy will fall flat. How can you expect couples to have three children when they refused to have two children due to various socioeconomic challenges despite abolition of the one-child policy in 2016?

The cost of raising children in many parts of China is high and it deters couples from having more babies. Because of high living costs and huge life pressures, China’s two-child policy failed to reverse the gradual fall in population.

“Generations of Chinese people have lived without siblings and are used to small families — affluence has meant less need for multiple children to become family-supporting workers, and young professionals say they'd rather give one child more advantages than spread their income among several kids,” wrote Stephen McDonell, the BBC’s China correspondent.

Other experts say the policy is completely inadequate to reverse the demographic decline unless China bring in structural changes such as improved access to childcare, maternity leave and a significant reduction in education costs.

Another underlying issue must worry many in and outside China.

Last year China adopted a five-year plan for a birth policy with an emphasis on eugenics. The plan is in line with the CCP’s listed policy goals for 2021-25 that seek to “optimize its birth policy” and “improve the quality of the population.”

Eugenics is a practice or advocacy of improving the human species by selectively mating people with specific desirable hereditary traits. It aims to reduce human suffering by “breeding out” disease, disabilities and so-called undesirable characteristics from the human population, according to history.com.

In fact, China wants to counter its aging population by encouraging Chinese women to have more babies — but only selected women.

That is evident in China’s genocidal treatment of Uyghur Muslims in Xinjiang, where many men and women are subject to forced sterilizations and forced abortions, resulting in a significant fall in birth rates. On the flipside, the authorities are encouraging educated Han Chinese women to have more babies.

China’s so-called “inclusive family planning policy” is no guarantee of basic human rights such as sexual and reproductive rights for all citizens and is just a flimsy attempt to cover up rising economic shortfalls that pose a serious threat to the communists’ grip on power in the long run.

In all probability, China’s three-child policy is poised to fail as the communist state continues to focus on development and economic prosperity at the expense of freedom and rights.