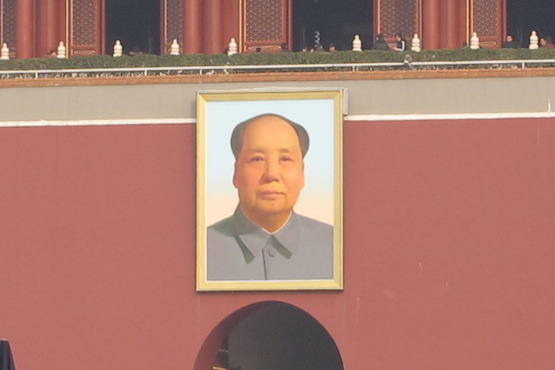 A portrait of Chairman Mao Zedong — the founder of communist China — that overlooks Tiananmen Square in Beijing. Earlier this year, a Chinese academic was fired for being critical of Mao's rule. (ucanews.com photo)

The year started with the sacking of a university professor who used social media to criticize Mao Zedong, the first chairman of the People's Republic of China.

The school committee of Shandong Jianzhu University sacked Professor Deng Xiangchao due to his very public opinion on how many millions of Chinese died due to Mao.

The school committee said Deng's opinions about Mao, and other comments made on the Cultural Revolution (1966-76), had a bad impact on the public.

For his views, Deng was also dismissed from his counselor post with the Shandong Provincial People's Government, a position he had held since 1997.

The day before he was removed from these positions, Deng's comments brought out an ultra-left group — that also adheres to a rabid form of state-sponsored nationalism — to protest against him.

Members of this ultra-left group of Maoists turned up out the front of Deng's university on Jan. 4, holding banners and shouting slogans against the professor who they accused of "publicly opposing Chairman Mao, the Chinese Communist Party and socialism."

They demanded the Education Bureau of Shandong remove "such counter-revolutionary elements from the education field." They also refuted a group of people who showed up to show their support for Deng, accusing them of opposing Mao under the disguise of freedom of expression. It ended up with physical clashes between the two groups.

The activities of this ultra-left group are a reminder of the brutality that was the Cultural Revolution, a movement that ripped Chinese society asunder and along with it the China Catholic Church, which had already suffered under communist rule.

In the mindset of the ultra-left, one could only deem Mao as a great leader. As far as they are concerned, there can only be one political line of thought, just as in there was during the Cultural Revolution or you were considered a counterrevolutionary.

Even if you were talking about historical facts, the ultra-left would never admit that Mao had any shortcomings.

What we see is the ultra-left choosing to repeat political struggles akin to the Cultural Revolution and they're making a mockery of Chinese President Xi Jinping's call for "rule of law."

We have come to such a point where if such an ultra-left culture of intolerance continues, what occurred at the university could be a harbinger for what the church in China may face. It could even be possible that the patriotic faction within the government-sanctioned open church community could face similar political struggles as their predecessors faced half a century ago when churches were ransacked and Catholics were persecuted by fanatics.

But Deng's case is not the first of the ultra-left's targets. In April 2015, Bi Jianfu, a host of the China Central Television, also lost his job after someone leaked a video of him criticizing Mao during a private banquet.

But these Cultural Revolution types of incidents are not just the actions of some hard leftists, they're also acts supported by certain unseen political forces that would prefer that any freethinking assessment or criticism of the Party's history be quashed.

Such support was obvious during the university protests when the government's security officers only confiscated the banners of Deng's supporters while not interfering with those of the ultra-left.

When the ultra-left hit Deng's supporters, the same security officers did not interfere. As for the police, they came too late to restore any sense of order.

The ultra-left even showed off their "achievements" on how they injured their opposition, yet they were not appropriately dealt by the police.

It was evident by those who were there that the ultra-left had tacit cooperation from certain security and police officers.

It was another example China's "rule of law" travesty and how violence can be applied and how institutions can play a role in that, as per what occurred during the Cultural Revolution.

What Deng went through was likewise similar to the slander dished out against Christianity recently when certain groups labeled Christmas foreign. It also came from the same political manipulation that fueled the attacks on Deng. In the case of their efforts to attack Christmas, they dared not do so on a large scale directly because of its popularity, even among non-believers. Groups, such as students have been used in such ways.

Last December, students of Chengdu Aeronautic Vocational and Technical College in Sichuan province, who were wearing ancient Han costumes, rallied against the "infiltration of foreign culture." They held up placards saying "No to Christmas" and "We don't want fake foreign festivals." A circular from another college asked their students to "Stay away from Christmas. Don't greet you or me with Merry Christmas."

From this, I cannot help but recall the Ninth National Congress of Catholic Representatives held late December where congress representatives reaffirmed the path of patriotism as advocated by the Communist Party, and vowed their support to the leadership of the Party.

However such showings of loyalty could mean nothing if the ultra-left, with political backing, continues to push its agenda, spelling danger for the China church. If that was the case, the promised loyalty from the Catholic representatives would mean nothing.

During the Cultural Revolution, it was not just those who refused to abandon their faith that suffered. Many of those who were victims during this period were those who once cooperated with the communist regime.

History has taught us lessons and they should not be forgotten. Such events such as the Cultural Revolution are not stopped by an optimistic view that tomorrow will be better or through siding with such a regime.

Wang Ruose is a Catholic commentator in northern China.