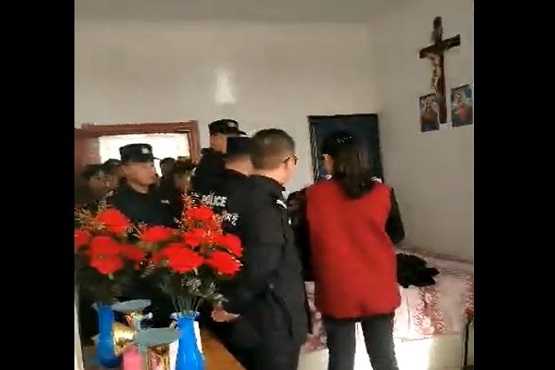 A still image of a video that captured the moment when Chinese police entered a church in Wudalianchi disrupting a Mass service to detain a lay leader and priest on April 20. (Photo of internet video)

Local communist officials in northeastern Heilongjiang province cracked down on an underground Catholic community trying to celebrate a weekday Mass on April 20, adding a further hurdle to closed-door negotiations being conducted by the Vatican and Beijing.

A 10-second video clip circulated online showed several police arguing with the congregation who were trying to stop them from detaining a lay leader and Father Shen Yanjun, an underground priest who began working at the Qingshan Church in Wudalianchi city seven months ago. The video clip was later removed.

The local government later released a work report saying they had "successfully stopped an underground Catholic priest from holding illegal religious activities" in a joint action involving officials from the Religious Affairs Bureau, the Public Security Bureau and the United Front Work Department.

The officials warned Father Shen and the lay leader that "without the local religious affairs office's approval, preaching inside the church is prohibited," according to a copy of the work report obtained by ucanews.com.

Officials told the priest that he violated the law and should apply for permission to conduct activities at a church. However, they could not say which law the priest had violated, said an eyewitness who asked not to be named.

Despite this, Father Shen has continued saying Mass every day.

The church has registered with the government but the officials do not acknowledge the priest. "The local government wants to take the church back since the open church community has no venues in the area," another source told ucanews.com.

The source suspected government officials may have been motivated by making most of an opportunity to prove themselves to their superiors as this is a remote place.

Wudalianchi belongs to Qiqihar Diocese, which is led by underground Bishop Joseph Wei Jingyi. The province also covers the Apostolic Administration of Harbin and the Apostolic Prefecture of Jiamusi, according to Vatican divisions.

However, the government only recognizes Heilongjiang Diocese and excommunicated Bishop Joseph Yue Fusheng, who is not recognized by the Vatican. The majority of the estimated 100,000 Catholics in the province are active in the underground community.

Observers say that the targeting of underground Catholics by the Communist Party underscores the difficult path to peace between Beijing and the Vatican.

A contentious part of the current talks between the Holy See and the Chinese regime is for the Vatican to pardon the seven government-appointed bishops that it does not recognize and for China to recognize nearly 40 underground bishops.

In his article on China-Vatican relations in February, Cardinal Tong of Hong Kong said he is not certain how willing Beijing is to recognize the identity of the underground bishops and their administrative rights of the dioceses. It will need "time and patience" for the two parties to resolve both issues, he said.