Tibetan Buddhist monks and nuns participate in a sit-in solidarity rally against China's rule on Tibet, in New Delhi in this Oct. 18, 2011 file photo. (Photo by Raveendran/AFP)

On May 28, the Tibetan Center for Human Rights and Democracy (TCHRD) published a report titled "Torture and Sexual Abuse Rampant in China's 'Political Re-education' Centers." This isn't the first report to shine a light on how China is "normalizing" its violations of human rights in Tibet.

It cites the testimony of a monk who wrote an account of what he saw and heard at one such center in Sog County of Nagchu district in Tibet. This was reportedly funneled in secret to the TCHRD's office overseas.

While the monk was studying at a monastery in China's Qinghai province, which shares a border with Tibet, he said government officials turned up one day and warned he would face a series of punishments if he didn't leave immediately.

They gave him an ultimatum: Go back to Tibet or see your family arrested, your family's kids barred from school, and your relatives prohibited from collecting caterpillar fungus, an expensive herbal remedy that people in the region use to buttress their incomes.

Finally he was detained in a political re-education center. Officials insisted it was not a prison but "a school," he said, adding he quickly realized that was a lie.

Most of those detained at the center were monks and nuns who were expelled from the Larung Gar Buddhist Academy or Yarchen Gar Buddhist Institute, he said. Both Buddhist training venues were demolished by the CCP.

According to the monk's testimony, the aim was to "brainwash" them on political and ideological grounds by forcing them to memorize "red" (Communist) songs, make them undergo Chinese military training, and instructing them to criticize and denounce their peers and spiritual leaders, including the Dalai Lama.

The Chinese resorted to torture, the most egregious example of which was the molestation of Buddhist nuns, wrote the monk, who had been detained for several months when he penned his account.

"A lot of the nuns would faint during their military training and the supervisors would rush them to their rooms. I saw them fondle their breasts and grope them all over," he wrote. 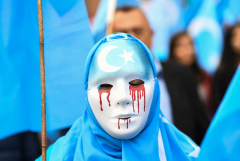 "I heard some of the supervisors took advantage of the unconscious nuns in other ways back back at their rooms," he added.

Claims of party cadres sexually assaulting nuns date back to the (1966-76) Cultural Revolution, or even earlier.

At that time, the (officially atheist) party mandated that monks and nuns must marry. It forced many to engage in sexual intercourse openly in a bid to smash their religious beliefs and force them to resume a secular life. Tibetan nuns in military uniform sings patriotic songs at the command of the Chinese Communist Party during detention at a so-called political re-education center in Tibet, China in this undated photo captured on a smartphone. (Photo supplied)
In November 1988, Britain's BBC broadcast a documentary shot secretly in Tibet detailing the experiences of 12 Tibetans who had suffered abuse at the hands of the party.

One nun broke down and cried as she recalled the appalling treatment she had suffered.

"My abusers handcuffed me, brought me to a police station and pushed me to the ground," she said.

"They stepped on my face, Tasered my chest and kicked me. Then they took off our clothes and three or four people raped us with a baton."

Another nun added: "We were constantly raped by seven or eight people. They left us naked."

There are many recorded cases of Tibetan Buddhist nuns being raped by police and prison guards of the Communist Party.

Some activists claim this is a deliberate policy to weaken the influence of Buddhist temples, as the nuns cannot keep serving the order once they have been "defiled."

But while these centers were primarily focused on stifling dissent or any perceived threat to the Communist Party's rule through means of suppression, they are now more aggressively trying to "educationally transform" their wards.

Critics say Beijing is trying to break them down spiritually by insulting their beliefs and subjecting them to acts that go against their religion and put them in a quandary, unable to resume monastic life upon their release.

They want to separate Tibetan intellectuals, monks and nuns from their traditions and beliefs and turn them into party-abiding Han Chinese, activists claim.

Since the communists invaded Tibet in 1950, forcing a young Dalai Lama to flee to India for sanctuary in 1959, it has viewed these guardians of Tibet's traditional culture and religious beliefs as a threat.

Tibetan rights organizations are now urging the international community to intervene as this state-sanctioned oppression reaches what they describe as a "a new level of terror" with the centers seen as nothing more than "labor reform camps" in disguise.