Visitors walk toward St. Peter's Basilica. The next round of China-Vatican talks occurs this month but most observers don't expect any breakthroughs on the issue of bishop appointments on the mainland. (Photo by Evan Vucci/AFP)

China and the Vatican have both changed at least one of their envoys as negotiations on bishop appointments on the mainland drag on, inviting speculation and rumors along the way.

On the Vatican side, Father Tadeusz Wojda, the Polish undersecretary for the Congregation for the Evangelization of Peoples, is no longer part of the negotiating team. There is no information yet on who his replacement is. Father Wojda was appointed Archbishop of Bialystok in Poland on April 12. Observers believe that given the Polish church's history of anti-communism, Father Wojda's presence in the negotiation team could upset the Chinese officials.

Officials from these two departments — the communist's Division Two at the SARA and the Vatican's Congregation for the Evangelization of Peoples — are traditionally involved in the negotiations.

Other negotiators representing Beijing are from the United Front Work Department — a communist organ that oversees religious affairs — and the Foreign Ministry.

On the Vatican side other negotiators include Monsignor Antoine Camilleri, the Under-Secretary for Relations with States. A file photo of Xishiku Church in Beijing. (ucanews.com photo) 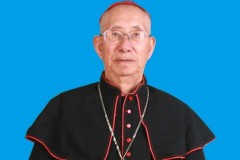 Unlike 2016, this year there was less coverage on the latest round of talks. While the next set of talks is expected to be held in Rome later this month, observers have commented on the slow pace of the negotiations.

Meanwhile, speculation and rumors have been rife.

There have been rumors that the Vatican has pardoned two of the seven government-appointed bishops whom the Vatican does not recognize and that Beijing demands all seven be pardoned.

Some Chinese Catholics believe Bishop Ma Yinglin of Kunming and Bishop Guo Jincai of Chengde, head and secretary general of the Bishops' Conference of the Catholic Church in China respectively, have been pardoned.

Their reasoning behind such rumors is that in the Communist Party's structure, the head and the secretary general of any department are people who hold de facto power. Recognizing these two bishops would help the Vatican grasp more influence on the bishops' conference, say those advocating such speculations.

They also cite that Bishop Ma has a new design for his coat-of-arm as further proof because bishops do not change their coat-of-arm casually.

China expert Father Jeroom Heyndrickx has refuted this rumor about the supposed pardoning of two of the seven government-appointed bishops. In the June issue of the Verbiest Update, Father Heyndrickx called it unfounded. "We should not be misled," he wrote.

"Christians and even more so the media are impatient and anxious to hear some news about progress in the negotiations," wrote Father Heyndrickx. "They start to guess and imagine reasons for the delay. Negotiations started in 2014. How come that even in April 2017 no agreement on the appointment of bishops has been promulgated?" he wrote.

In his article, Father Heyndrickx said there have been some signs of progress, given that among the five new bishops last year, three were candidates of Rome while two were government candidates approved by Rome.

He repeated the Vatican Secretary of State Cardinal Pietro Parolin's warning that the road ahead for the talks is a long one.

Another issue on bishops appointments was that the Vatican wants Beijing to recognize about 20 bishop candidates that it has appointed for the open community and nearly 40 underground bishops.

There was suspicion on the China side about the ever-increasing number of underground bishops. Beijing suspects that the Vatican continues to appoint bishops secretly despite ongoing negotiations.

As of December 2015, the China Church has 29 active underground bishops, according to the 2016 Spring Issue of Tripod, a quarterly journal of the Hong Kong Diocese's Holy Spirit Study Center.

In his article regarding China-Vatican relations published in February, Cardinal John Tong of Hong Kong spoke of "more than 30" underground bishops. But later in March he said that there were "close to 40" underground bishops in China, in an interview with the U.S.-based Catholic National Reporter.