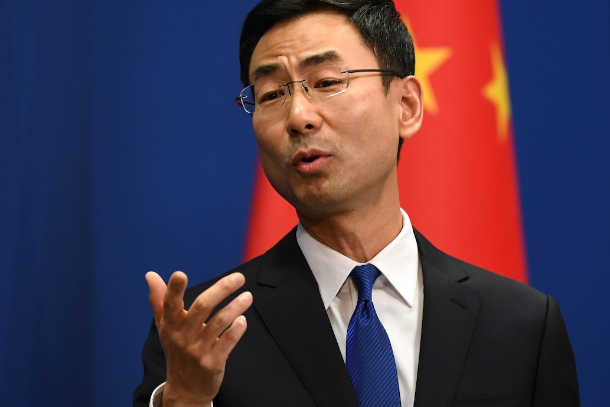 In an escalation of its showdown with the United States, China has effectively expelled journalists attached to three leading US newspapers in the latest tit-for-tat actions that started last month.

On March 18, China's foreign ministry ordered the reporters of The New York Times, TheWall Street Journal and The Washington Post to return media passes, which expire this year, within 10 days.  Beijing said its action is "in response to the US slashing the staff size of Chinese media outlets in the US, which is expulsion in all but name."

The foreign ministry said the US journalists will not be allowed to continue working as journalists in the People's Republic of China, including its Hong Kong and Macau special administrative regions. Early this month, the US administration imposed caps on the number of Chinese citizens who can work as reporters in the US. Washington had designated five Chinese state-run media outlets as representatives of the diplomatic mission, meaning that they represent their country's government.

The US move was cited as a retaliation for the expulsion of two Wall Street Journal reporters over an editorial on coronavirus in February. Foreign correspondents in China were among those who aggressively covered the pandemic's outbreak in China in December. Beijing's foreign ministry statement said: "What the US has done is exclusively targeting Chinese media organizations, and hence driven by a Cold War mentality and ideological bias."

All foreign correspondents are required to renew their press credentials annually by year-end in China. It means reporters of the three US publications have expiring visas and will have to leave China under the new directive. The exact number of affected US journalists is unclear but media reports say it could be as many as 13.  By expelling reporters from Hong Kong and Macau, China is curbing press freedom in those autonomous territories, which do not operate under the same regulations as mainland China. In Washington, Mike Pompeo, secretary of state, told journalists on March 17 that China should reconsider the expulsions. "I regret China's decision today to further foreclose the world's ability to conduct free press operations, which, frankly, would be really good for the Chinese people in these incredibly challenging global times," he said. But he refuted the idea that the move was retaliation for US actions. "This isn't apples to apples," he said. The Foreign Correspondents' Club of China had noted that Chinese authorities are "using visas as weapons against the foreign press." The New York-based Committee to Protect Journalists (CPJ), however, called on Washington and China to bury the hatchet. "China and the United States need to pull back from this dangerous cycle of tit-for-tat retaliation that threatens the free flow of information in both countries," Steven Butler, CPJ Asia program coordinator, said in an online statement. Amid a pandemic, the standoff between the world's two superpowers has risen on multiple fronts. It was fueled by a trade war that US President Donald Trump initiated in 2018. Since then, both countries are pushing against each other to prove superiority. The rows over trade, intellectual property rights and 5G networks have damaged US-China ties in recent years. Washington and Beijing have been accusing each other on coronavirus. President Trump invited the wrath of China by referring to the coronavirus as "Chinese." Last week a Chinese foreign ministry spokesman alleged the US army had brought the virus to mainland China.