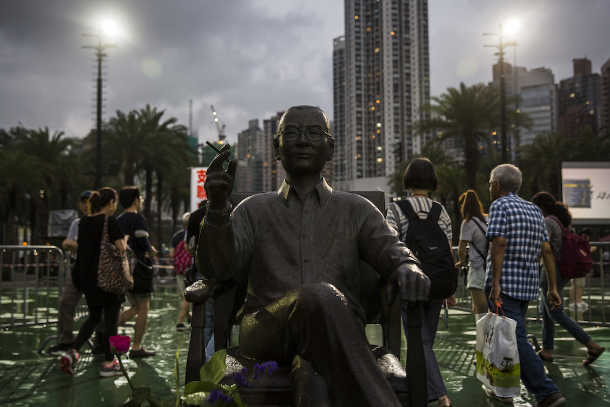 People walk past a statue of the late Nobel laureate Liu Xiaobo before a vigil in Hong Kong on June 4 to mark the 30th anniversary of the 1989 Tiananmen crackdown in Beijing. Liu died in July 2017, three weeks after he was transferred to a hospital under heavy security. (Photo by Isaac Lawrence/AFP)

Human Rights Watch (HRW) is calling on Chinese authorities to investigate the circumstances surrounding the death of a prominent activist.

Ji Sizun, 69, died in mysterious circumstances on July 10, two months after being released from prison. At the time he was being guarded by state security in a hospital in the southeastern province of Fujian. There had been reports of him being mistreated while in detention.

Ji was released from prison in late April after serving four and a half years on charges, described by HRW as fabricated, of “gathering a crowd to disrupt public order” and “picking quarrels.”

He was immediately “admitted” into the intensive care unit of Xiangcheng District Hospital in his hometown of Zhangzhou, where he was allowed only very limited family visits. His friends were barred from visiting him and all those close to him were warned against speaking publicly about his condition.

Ji’s family said his health was fine when he was imprisoned in 2014 but while serving his sentence he suffered from high blood pressure, diabetes and coronary artery disease. His lawyers applied several times for him to be given parole on medical grounds but every request was refused.

Ji, who described himself as a “grassroots activist,” gave legal advice and training to disadvantaged groups, including the victims of China’s one-child policy and those whose land had been taken by the authorities.

In 2009, he applied for a permit to stage a protest at one of the three official “protest zones” during the 2008 Beijing Olympics and promptly found himself jailed for three years by a Fujian court for “forging official seals and documents.”

Another Fujian court jailed him for four and a half years in 2016 after he helped petitioners organize protests and supported the pro-democracy rallies in Hong Kong.

His manner of death is far from unique. Several prominent dissidents in China have become seriously ill while being detained in recent years. Some have been denied adequate care and either died in detention or soon after being released.

In July 2017, Nobel peace laureate Liu Xiaobo died three weeks after he was transferred to a hospital under heavy security, while in November that year dissident writer Yang Tongyan died less than three months after being released on medical grounds.

The United Nations Standard Minimum Rules for the Treatment of Prisoners stipulate that all death-in-custody cases should be subjected to “prompt, impartial and effective investigations into the circumstances and causes” of the death.

Researcher Wang is not as diplomatic in his views. “The only lesson Chinese authorities seem to have learned from these activists’ deaths is that they can get away with wrongful treatment of prisoners,” he said. “The government’s failure to publicly account for these deaths will only mean more unnecessary loss of life in the future.”