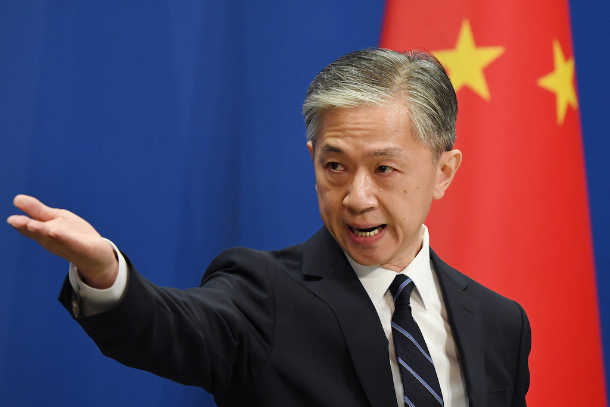 Chinese Foreign Ministry spokesman Wang Wenbin takes a question at a briefing in Beijing on July 24. China on July 24 ordered the US consulate in the southwestern city of Chengdu to close in retaliation for one of its missions in the United States being shuttered, capping a furious week of Cold War-style diplomacy. (Photo: Greg Baker/AFP)

China has threatened not to recognize British National (Overseas) passports as valid in retaliation for Britain's disapproval of the national security law imposed on Hong Kong by Beijing.

Chinese Foreign Ministry spokesman Wang Wenbin on July 24 raised doubts about the passports as the territory's former colonial ruler unveiled a plan to ease the path to citizenship for more than three million Hong Kong residents. China alleged that Britain is acting against the 1997 handover treaty, which prevented conferring citizenship to Hongkongers holding BNO passports.The UK pointed out that China breached the treaty by implementing the draconian national security law. The "one country, two systems" framework meant, among other things, rights such as freedom of assembly, free speech and freedom of the press would be protected.

Nearly 350,000 persons hold BNO passports and the UK government estimates that there are about 2.9 million BNO passport holders in total. They normally use the passport to visit the UK, Japan and the US.Reacting to the latest Chinese move, Britain insisted that China should recognize BNO passports as valid. "They are legitimate international travel documents and that's how you would expect them to be treated," Prime Minister Boris Johnson's spokesman James Slack told reporters.Under the new British citizenship plan, Hongkongers holding BNO passports can apply for special visas to stay in Britain from next year, eventually making them eligible for citizenship.However, Hong Kong residents born after the 1997 handover are not eligible for the BNO passport.According to a BBC report, of Hong Kong's 7.5 million people, some 800,000 have British, Australian, Canadian or American passports, including expats.China claimed Britain is interfering in domestic affairs by offering citizenship and is violating international treaties and principles.China's embassy in London said in a statement: "The Chinese side urges the British side to recognise the reality that Hong Kong has returned to China, to look at the Hong Kong national security law objectively and immediately correct its mistakes."The UK action to confer citizenship was the outcome of a clause in the national security law that exerts power outside China's borders.The international community fears China will use the extradition route to target Hongkongers involved in pro-democracy protests in the city-state since last year.Britain suspended its extradition treaty with Hong Kong on July 20 and imposed an arms embargo on the territory. Canada and Australia followed suit on July 3 and 9 respectively. However, Britain's extradition treaty with China is still intact.Legal experts pointed out that Hong Kong youths between 18 and 23 could still be in danger as they are too young to register for BNO status under the UK immigration system. Youths have been spearheading the pro-democracy protests.Priti Patel, UK home secretary, recently assured lawmakers that she was "actively looking at that particular age group" and was considering a number of options.The Chinese move has threatened the immigration plans of millions of Hongkongers who were betting big on the BNO passport to flee the city, looking for a safe haven instead of a life under the national security law.