China takes the hardest of hard lines on minorities

Beijing's treatment of the Uighur minority is causing bloodshed 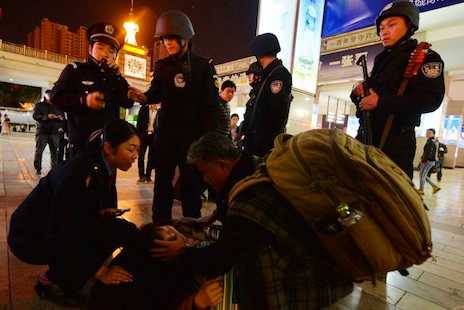 On the evening of March 1 a gang of eight people clad in black went on a violent rampage in the main railway station of Kunming, the capital of the southern Chinese province of Yunnan. Armed only with knives, they killed 29 people and injured over 140. Police shot five of the assailants, killing four and detaining one. Subsequent media reports, both from China and abroad, said it was the work of a Uighur terrorist group.

Six weeks earlier, Professor Ilham Toti, an economics don at Beijing's Minzu University and perhaps the country’s leading Uighur intellectual, was taken into custody. A vocal critic of China’s policy toward the Uighurs, and minorities in general, he became the latest victim of the long running crackdown on independent thought in the country.

The two incidents – the attack in Kunming and Toti’s arrest – signal a problem in China that refuses to go away: that of an increasingly bitter divide between the country’s minority groups and the central government. It would appear that the Kunming attacks were the work of Uighurs, although contrary to statements released by Beijing, no “terrorist” groups have come forward to claim responsibility. It now seems possible that the killers were part of a much larger group who were left behind while the rest fled overland into Laos, most of whom were later arrested. There is a view now that the railway station attackers may have realized that it would not be possible to escape China and decided to go down fighting.

The Uighurs, a Muslim minority, hail from Xianjiang, a far flung northwestern province of China. Ethnically and linguistically, they are closely related to the Turks – indeed for two brief years last century, much of Xinjiang’s southwest was an independent state known as East Turkestan. The region is rich in natural resources, but for centuries has stood at the periphery of Chinese control, and for periods even had Soviet influence.

In the first weeks of March every year, the foreign press in China homes in on the National People’s Congress, the country’s rubber stamp parliament. Held alongside this is the Chinese People’s Political Consultative Conference, known as the PCC, and it is here that a rare public spotlight falls on China’s ethnic groups.

Membership of the PCC is drawn from 12 organizations, including the Chinese Peasants and Workers Party and Taiwan Democratic Self-Government League, as well as the Communist Party. At the centre of the PCC is the Committee for Ethnic and Religious Affairs.

At the PCC, minority groups are paraded for the Chinese public in a Disney version of their 'national dress', exclaiming how wonderful the Communist Party has been to them. For even the vaguely initiated, it can be cringeworthy to watch.

Along with the majority Han, China has 55 smaller ethnic groups that make up, collectively, just seven percent of the population. That figure however equates to around 125 million people. Because of a ruling that every Chinese citizen must state their 'race' on their ID cards, they are easily singled out.

Many of China’s minorities live in so-called autonomous regions – Tibet, for instance – or prefectures within existing provinces where the ethnic groups comprise a large percentage of the population, supposedly allowing them a measure of self-rule.

In practice the 'autonomous' governments take their cue almost exclusively from Beijing. The theory is that given enough time and economic development, any 'anti-Chinese' elements in the ethnic communities will gradually be ameliorated. In practice, with the so-called development comes a huge influx of Han Chinese. This is often widely resented, and the domestic Han migrants tend to get precedence over the locals for the best jobs.

Outside of the ongoing troubles in Tibet, the most searing example of how this has played out in reality has been in Xinjiang. Since the deadly riots of July 2009, when over several days Uighurs and Han Chinese communities battled it out on the streets of Urumqi, the capital of the Xinjiang Uighur Autonomous Region, there has been ongoing harassment of the non-Han.

In June last year police admitted to having opened fire on hundreds of Uighurs protesting over the forced closure of a mosque in Hanerik township and the arrest of the imam. Authorities killed up to 15 people and arrested 200.

The scale of the oppression of the Uighurs in their homeland can be measured by their flight out of the country. Chinese state press says that about 200 people have died due to growing unrest in Xinjiang in the past year, and the exodus continues. Recently 220 Uighurs – 78 men, 60 women and 82 children – were discovered in a human trafficking camp in Thailand’s southern Songkla province. There are now 409 official Uighur refugees in Thailand.

Exactly how they came to be in the far south of Thailand is not clear, but their route out of Xinjiang may have taken them through Laos, possibly Myanmar, and then Thailand. They claim they are Turkish and refuse to communicate with Thai or Chinese officials. A key reason for this may be that other Uighurs fleeing to other Southeast Asian nations have been less fortunate, with Cambodia, Myanmar and Vietnam all deporting groups back to China.

In the meantime, Beijing has announced its intention to pass special 'terrorist' laws for Xinjiang which would add another layer to the country’s already oppressive criminal code, which essentially targets anything that aggrieves Beijing. For the Uighurs this is just the latest step in what could be described as a very ugly version of “one country, two systems.”