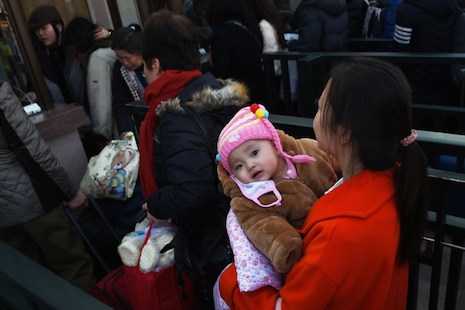 China on Friday announced its latest crackdown on prenatal gender exams and illegal abortions despite further progress in narrowing the gap between the high number of male versus female births.

Authorities will target clinics and agencies “suspected, but never caught” carrying out tests that allow parents to determine the sex of their child and abort in favor of a male heir.

“Fetus gender exams and abortions are the direct reason for the unusual sex ratio of newborns in China,” Li Bin of the National Health and Family Planning Commission told state news agency Xinhua.

But China still registers the widest gender gap of any country, well above the worldwide average of about 102 boys born for every 100 girls.

“However, only a small fraction of them were given serious punishment,” he added. “Driven by both market demand and potential high profits, the number of cross-regional cases has been on the rise. It even generated an illegal industry chain in some areas.”

China’s gender gap began to widen in the late 1980s when the government’s implementation of the single-child policy coincided with ultrasound technology becoming widely available.

In a country where tradition emphasizes the importance of a male heir, the number of sex-selective abortions reportedly skyrocketed. By the turn of the millennium, provinces including Anhui, Jiangxi and Shaanxi recorded more than 130 boys born for every 100 girls.

In recent years, state policy and changing attitudes have helped reverse the trend.

The government has in recent years relaxed the single-child policy as the fertility rate has plummeted and offered subsidies to families who raise girls and then choose not to have more children.

In the past, Chinese favored boys — traditionally the main breadwinners — but recent academic research suggests some newlyweds are switching their preference to girls.

As the costs of buying a house and car have spiraled amid rapid economic growth, husbands and their extended families have faced rising financial pressure to meet their traditional obligation to buy real estate. In China, tying the knot without first buying property is known as a “naked marriage”.

“My older sister had a girl and she said she was lucky because she doesn’t have to save money right away,” said Wei Dan, a 26-year-old female architect in Beijing.

Born in rural Inner Mongolia, Wei said that some families still favor sons in China’s vast countryside, but not to the extent seen in previous generations.

“Before, parents wanted sons but now the culture has changed, most people think a son or a daughter is now okay,” she said.