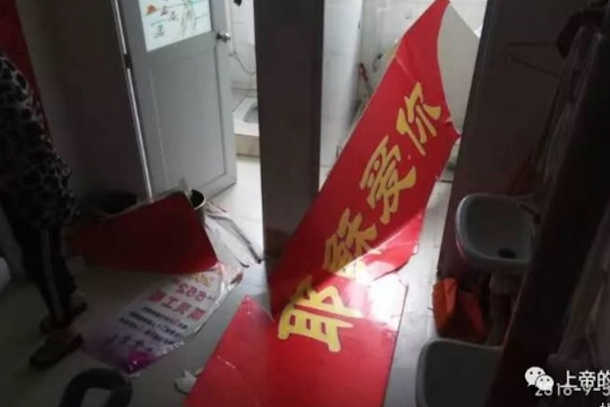 This Protestant church in Henan province was raided and vandalized by provincial officials and police on Sept. 5. (Photo supplied)

A Hong Kong Protestant group has urged the faithful to express their discontent with mainstream churches in the Chinese territory turning a blind eye to China's recent crackdown on Protestant churches.

Yeung Ho-yin, the founder of HKBCBS, wrote on the group's Facebook page on Sept. 12 that the crackdown is thought to be the largest since the Cultural Revolution.

He said the suppression started in Henan province in late August as the provincial government demolished crosses, burned Bibles, arrested church members and seized churches. It soon spread to other cities and provinces. "The government is planning to tighten preaching on the internet," he wrote.

A few pastors have voiced their concerns and some Protestant communities in Hong Kong are planning to organize meetings to raise awareness of the issue.

According to Radio France Internationale on Sept. 10, more than 7,000 crosses have been demolished in Henan, far more than the 1,700 demolished in Zhejiang province since 2014. Even government-sanctioned churches have not been spared.

Two-thirds of Henan churches have been forced to close, according to media reports. Many preachers and pastors had to undergo political assessment. Only those who advocated socialist core values were allowed to preach.

In addition, the Zion Church, the largest house church in Beijing, has also been repressed by authorities.

Seven Zion churches have been forced to close after being accused of holding religious activities without registration, but a Zion pastor said house churches had no channel to register under the current system.

In Guangzhou city of Guangdong province, some pastors who run house churches were penalized by the local government for organizing illegal religious gatherings.

In Chengdu city in Sichuan province, the Early Rain Covenant Church has been repeatedly disrupted by authorities.

Professor Ying Fuk-tsang, director of the divinity school at the Chinese University of Hong Kong, said in an interview with Voices of Germany that Chinese authorities were suppressing the growth of Protestant churches, "reflecting [President] Xi Jinping's ideological fight and his belief that Protestant churches threaten the Communist Party."

The White Paper on Religious Policy released by the State Council Information Office in April indicated that China's Christian population is more than 38 million, a significant increase of 65 percent from the 23 million recorded by the Academy of Social Sciences in 2010.

The state-run Global Times published an editorial on Sept. 11 saying that Chinese citizens are enjoying full freedom of religious beliefs but simultaneously religions need to be managed according to the law. "And management is needed since, in some places, people are violating the law to organize illegal activities."

It said it is almost impossible for outsiders to fully understand China's religious affairs as there is a serious ideological difference between China and the West, but the management of religious affairs in China has "the backbone to resolutely act according to the law."

Pastor Jin Mingri, director of the Zion Church, said the government is obviously hostile to religions and believes that all religious communities including Islam, Buddhism and Catholicism should be politicized.