Communist China's officials severely restricted the funeral of an elderly underground bishop, moving his burial to early morning and allowing only 18 people to attend it.

Authorities allowed only 15 Catholics, a bishop and two priests to attend the burial of Bishop Joseph Ma Zhongmu, China's oldest and only ethnic Mongolian bishop.The bishop, not recognized by the state, died on March 25 aged 100. He died of an age-related illness, said an official communication from Ningxia Diocese.
Donate to UCA News with a small contribution of your choice
Bishop Ma, who was ordained bishop of Ningxia in 1983, led the diocese in the northwest of the Inner Mongolia Autonomous Region until his retirement in 2005.He had been ailing for the past two years after he was diagnosed with pulmonary edema, Father John of Ningxia Diocese told UCA News.He was leading a retired life in Chengchuan but since last year had failed to recognize anyone, said the priest, who used to visit Bishop Ma.The government barred people from attending his funeral and burial on March 27 because of the restrictions in place against gatherings as a step to check the spread of coronavirus.Father John said the local religious bureau asked him not to attend the funeral because of the pandemic. He said the reason for barring people from the funeral might also be related "to the identity of Bishop Ma."Local Catholic sources told UCA News that the government interfered and moved the funeral from 8am to 5am."Authorities blocked the entire street and no priest could approach it. They also did not allow participants to bring mobile phones or take pictures," one source told UCA News.
Related News 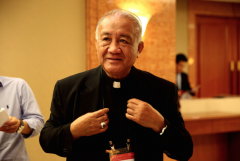 Thank you. You are now signed up to Daily newsletter
Bishop Ma's obituary, issued on March 25, named him only as "Father Ma Zhongmu" as the late bishop belonged to the underground church, which is not officially recognized by China's communist government.Anthony Lam Sui-ki, a China Church expert, said the region now has two bishops — Bishop Matthias Du Jiang of Bayan Nur League and Bishop Li Jing of Ningxia (open church), who are both recognized by the state.Lam said Catholics followed the bishop of their preference when Bishop Ma was alive.Although the government did not recognize Bishop Ma, he had good relations with the government. "The authorities still respect Bishop Ma," he said.The only Mongolian bishopLam said the Mongolian identity of Bishop Ma was very significant because they are "a minority, and a bishop from such as minority shows the diversity of the Church."The Congregation of the Immaculate Heart of Mary had admitted an ethnic minority Mongolian, which also showed the universality of the Church, he said.Bishop Ma was born in a town in the Ordos, Inner Mongolia, in November 1919. After studies at a local minor seminary, he studied philosophy at Suiyuan Seminary and theology at Datong Theological Seminary.At the age of 27, he was ordained a priest in July 1947 for Ningxia Diocese.He attended the Agricultural College of Peiping Fu Jen University for two years from 1948. He served a parish and later taught at Suiyuan University.During the Cultural Revolution, he was arrested and sent to jail like all Catholic priests. They were released only in April 1979.In 1980, Bishop Ma returned to his parish to begin pastoral work, and in 1983 he was ordained bishop of Ningxia.After retirement, he lived in the Catholic Church of Chengchuan, Inner Mongolia, until his death.According to Tripod, a publication of the Holy Spirit Research Center, Bishop Ma translated the scriptures of the Mass into Mongolian and presented his work to the Vatican. But it has not been formally published yet.